In order to check this hypothesis, it requires a detailed crude oil price analysis, more than this post can handle, however, herein I will review last month’s data about the main currencies including the euro dollar rate and their correlation with oil prices.

In the following graph are daily spot prices of main currencies (including Euro, Canadian dollar, Australian dollar and Yen) against the US dollar after indexing all of them to the 0% at the beginning of October along with the crude oil price in the same manner for the month of October. 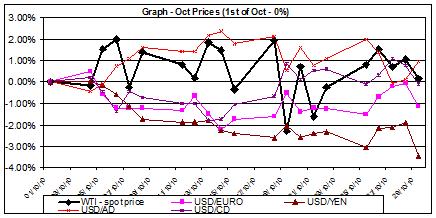 It seems that there is not much of trend as oil prices made a small increase in the middle of the month and eventually settles back at a similar level in the beginning of the month. The same goes for the other currencies with the exception of the USD/Yen which show that the USD weakened compare to the Yen, more than other currencies.

It should be noted that I have included AUD and CAD because these two currencies are of economies that are heavily important in exporting crude oil to China (Australia) and US (Canada).

In the second and more important graph I present the percent change on a daily basis of each of the indexes. 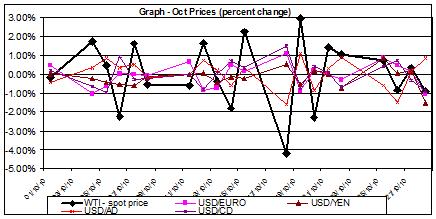 When summing the data into a table that shows the level of correlation, one may notice that while there seems to be a high correlation between euro dollar rate and crude oil price, but there is a stronger correlation of daily percent changes among oil prices,  USD/AUD and USD/CAD.

What does it all mean?

For now, let’s just say that there is a correlation between the last two above mentioned exchange rates and the crude oil price; however we are still a long why from proving a cause and effect relationship. Also, since all currencies are related and correlated (e.g. the USD/EURO and USD/CAD have a 0.8 correlation in the daily percent change), it looks that it’s more likely that we should pay more attention to USD/AUD and USD/CAD than to USD/EURO when considering crude oil price.