The recent recovery of the U.S. dollar along with the rally of U.S. equities provided the proper climate to see gold and silver fall down. Moreover, the latest interview given by Bullard gave the necessary excuse to keep the speculations around the FOMC’s next meeting. This also allowed easing down on the hawkish tone of the FOMC from the past meetings. This week the FOMC will convene for its penultimate meeting for the year. The GDP for the third quarter – first estimate will also be released and could crowd out the impact the FOMC statement may have on the bullion market if the GDP doesn’t meet market expectations. In Asia, BOJ’s rate decision and China’s manufacturing PMI will be the main focus. In Europe, ECB’s stress tests results will be released along with EU monetary developments, flash CPI and unemployment rate. So let’s review the economic outlook for the week of October 27th to 31st:

The FOMC will hold its meeting on October 28-29. The statement of the meeting is expected to announce the end of QE3. If Bullard were able to shift the tides in the FOMC and persuade Yellen to keep the QE3 at its current pace – as an open end purchase program, this could have a positive impact on gold and silver prices. Keep in mind, however, this scenario isn’t likely. 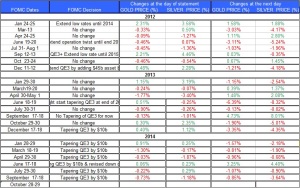 U.S. GDP for the third quarter will also be released on Thursday. In the last estimate the U.S GDP grew by 4.6% in the second quarter. If the US gross domestic product doesn’t pick up, this could reduce the odds of the FOMC turning more hawkish and thus pull up gold and silver; the current estimates are for the GDP to grow by 3.1%. Anything lower than this number and we may see bullion prices rally.

The personal consumption expenditures index is another measure the FOMC follows to assess the U.S. inflation. Last month, the core PCE (excluding food and energy) edged up by 0.1%. On an annual rate, the core PCE rose by only 1.5% – still well below the 2% target. If the inflation starts to rise, this could positively impact gold and silver prices.

Following China’s GDP report from last week, the manufacturing PMI will be next for the week. If it shows little progress, then this could suggest China’s economy, while still growing (as the PMI is expected to remain at 51.1), isn’t growing any faster. This turn of events isn’t likely to help pull up gold and silver.

During last week, the demand for gold as an investment sharply declined — gold hoards in the GLD ETF, the world’s largest gold ETF fell to 745.38 tons by the end of last week – nearly 2% below the previous week and it’s also down by 3.5% since the beginning of the month.

Finally, the recent recovery the U.S stock market experienced as the S&P500 rose by 4.1% last week. This recent market reaction also coincided with the drop of GLD and SLV. If the U.S equities keep recovering, this may also coincide with GLD and SLV’s decline.

My guess: The FOMC won’t present any major changes so QE3 will end, which is likely to bring further down gold and silver. But the U.S. GDP for the third quarter could shuffle the cards and pull back up gold and silver in the unlikely, yet very plausible, event of GDP falling well below 3% – say 2%-2.5%. Bottom line: I suspect precious metals will resume their downward trend.

← Financial Market Forecast for October 27-31
Has the Weakness in the Oil Market Fueled the Decline of UNG? →