Last week started with sharp gains for gold and silver, but this week started with very modest gains. In the coming days, however, the volatility might start to pick up, which could result in sharper movement in the prices of gold and silver. Today the FOMC meeting will commence. The Fed’s meeting will conclude tomorrow that will follow a statement. Until then, the U.S housing data weren’t too positive as pending home sales index slipped by 0.4% to 110.9 in June. This news, however, didn’t stir up the markets. It seems that the markets remain poised for the FOMC meeting statement, the ECB rate decision and non-farm payroll report that will come out later this week. On today’s agenda: Governor Stevens speaks, German Consumer Climate and U.S Consumer Confidence.

Here is a short outlay for precious metals for Tuesday, July 30th: 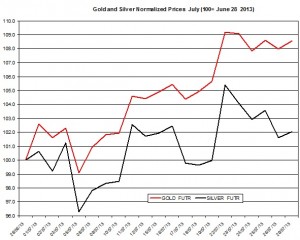 The ratio between the two precious metals slightly increased on Monday to 66.92. During July, the ratio rose by 6.35% as gold moderately out-performed silver. 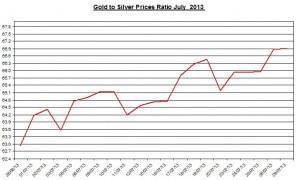 See here the weekly outlook of gold and silver for July 29- August 2. 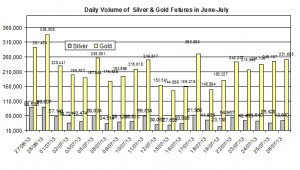 Governor Stevens speaks: Reserve Bank of Australia Governor will give a speech at the Anika Foundation Luncheon supported by the Australian Business Economists and Macquarie Bank, in Sydney; in his upcoming talk, the Governor may refer to the recent RBA monetary policy meeting, in which the RBA left its interest rate flat; this speech may affect the Australian dollar, which is strongly linked with gold and silver;

Gfk German Consumer Climate Survey: This survey estimates Germany’s consumers’ economic climate including past and future economic conditions (on a monthly basis) for July. In the recent report for June 2013, the climate index slightly rose to 6.8;

U.S Consumer Confidence: Based on the latest monthly update, for May, the consumer confidence index rose to 81.4 (month-over-month). The current expectations are that the June index may further rally; this report might affect bullion prices;

The Eur/ USD currency pair changed direction and slipped on Monday by 0.13% to 1.3262. During July, the Euro/USD rose by 2.07%. Further, other currencies such as the Aussie dollar also slightly depreciated yesterday against the U.S dollar by 0.57%. The correlations among gold, Euro and Aussie dollar remained strong, e.g. the correlation between the Euro/USD and gold price is 0.57 during July.  The chart below shows the linear correlations among precious metals and leading currency pairs during the month (up-to-date). 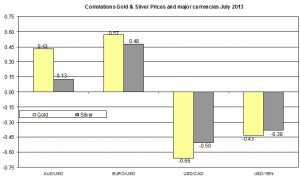 Current Gold and Silver Rates as of July 30th

← Gold and Silver Prices Outlook for July 29 – August 2
Will Silver and Silver Wheaton Continue to Recover? →