The gold and silver ended the month with a sharp fall in their prices. As a result the gains of gold and silver were erased on the last day of the month. The recent drop in gold and silver coincided with the recovery of US dollar against the Euro and Canadian dollar. Will gold and silver bounce back from their recent fall this week? On today’s agenda: Reserve Bank of Australia Cash Rate, Bank of Japan’s Kuroda Speaks, Switzerland’s CPI, GB Services PMI, EU Economic Forecast, and U.S ISM Non-Manufacturing PMI.

Here is a short overview for precious metals for Tuesday, November 5th: 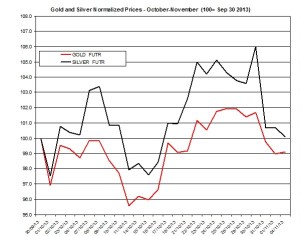 The ratio between the two precious metals slightly increased on Monday to 60.59. During November, the ratio decreased by 0.07% as silver has moderately out-performed gold. 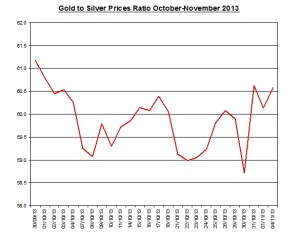 The gold and silver futures volumes of trade have fallen and reached on Monday 85 thousand and 25 thousand, respectively. If the volume start to pick up in the coming days, this could imply the odds of sharp movement in the rates of gold and silver as a result of high volume will rise. 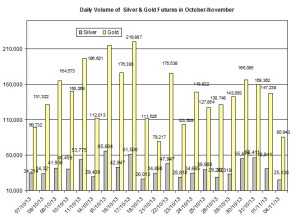 U.S. ISM Non-Manufacturing PMI: This monthly report will refer to October. In the latest report, this index decreased, for the first time in three months, to 54.4% – the non-manufacturing sector is growing at a slower rate compared to the previous month; this index may affect the US dollar;

Reserve Bank of Australia – Cash Rate Statement: The last time the RBA reduced its cash rate was back in September. The current rate is at 2.50% – its lowest level in years, which contributed to ongoing depreciation of the Aussie dollar. The current expectations are that RBA will keep its cash rate unchanged in this upcoming rate decision;

Bank of Japan’s Kuroda Speaks: Bank of Japan Governor will talk at the meeting with Business Leaders, in Osaka. Kuroda’s words could affect the direction of the Japanese yen;

Switzerland’s CPI: In the last report, the consumer price index rose by 0.3%; this was the first rise in CPI in months; if the CPI continues to rise, this may eventually affect the Swiss National Bank’s monetary policy;

GB Services PMI: In the last report, this index slipped to 60.3; this index may affect the British Pound’s direction;

EU Economic Forecast: The European Commission will issue its quarterly outlook report for the EU economy;

On Monday, the Euro/ USD currency pair rose by 0.20% to 1.3514. During November, the Euro/USD fell by 0.52%. Moreover, other currencies such as the Aussie dollar also appreciated yesterday against the U.S dollar by 0.76%. The correlations among gold, silver and Euro remained strong in recent weeks, e.g. the correlation between the Euro/USD and gold price is 0.62 during October/November.