The precious metals market cooled down at the end of the month and both gold and silver prices tumbled down on Thursday – the last trading day of the month. In the last four consecutive months gold and silver declined on the last day of the month. The recent FOMC meeting didn’t any new headlines, but some analysts have read into the wording of the statement in which the FOMC might be open for tapering QE3 this year, which may have contributed to the rally of USD and drop of gold and silver. In other news, jobless claims fell by 10k to 340k. In other news, U.S manufacturing PMI slightly rose to 56.4 in October – a 0.2 percentage point gain. ADP reported a 130k gain in payroll jobs in October. In China’s the manufacturing PMI rose in October – the final PMI grew to 51.4 and the HSBC PMI increased to 50.9; these reports suggest the manufacturing conditions in China are growing in a faster pace. These reports could pull back up commodities prices next week. By the end of the week, gold price decreased by 2.89% and silver by 3.42%.

Here is a short review of the latest developments in precious metals prices between October 28th and November 1st:

The chart below shows the changes in precious metals prices, in which they are normalized to 100 as of October 25th. Gold and silver prices sharply fell during the previous week mainly on Thursday. 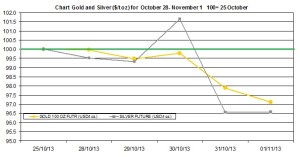 The second chart shows the daily percent shifts of bullion prices (or in other words the changes around the trend). Silver and gold didn’t do much at the beginning of the week only to tumble down on Thursday. Gold and silver prices daily percent changes ranged between 2.5% gain and 5% drop. 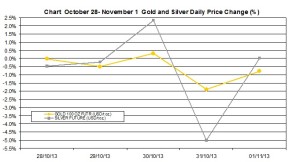