The gold and silver market is heading towards an important week as the upcoming FOMC meeting will eclipse any other event. In the last FOMC meeting the members decided that a rate hike in December will most likely be the date. But promises were made in the past so the market isn’t fully convinced. The recent NFP report  was “good enough” to refrain the Fed from using the-data-doesn’t-support-a-rate-hike-at-this-point excuse. So with the clock ticking, let’s see how will this important rate decision impact gold and silver prices.

In the recent meeting, gold and silver didn’t move in concert: Gold rallied while silver dropped. Back then, the FOMC left the door open for a rate hike, which persuaded many that a rate hike will take place in December. 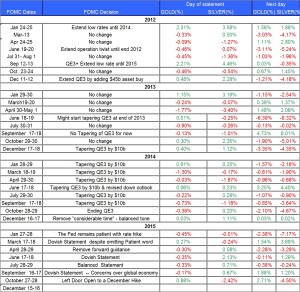 For now, the market estimates, as derived from the recent Fed-watch update on the implied probability for a rate hike, there is an 81% chance for a rate hike in the upcoming meeting. The table below shows the market’s end of the year outlook for the Fed’s cash rate – for 2015 and 2016 – and the FOMC’s member’s median outlook based on the dot plot from the September meeting.

As you can see, for this month’s rate, the market is almost in line with the Fed’s outlook from the last outlook update.  This modest difference could be the small margin that is not priced in yet for a Fed’s rate hike. In other words, the surprise, in case of a rate hike won’t be as powerful as a no-rate-hike decision in this upcoming meeting.

For the upcoming meeting we have three possible outcomes:

But the table above also shows that the market’s outlook places a much lower rate by the end of 2016 then what FOMC members thought will happen. This market estimate places, assuming the Fed moves forward and raises rates this year, another two rate hikes of 0.25 pp during 2016. FOMC embers thought back in September there will be close to 4 hikes. In the upcoming meeting the Fed will release its members’ outlook about the cash rate and the U.S. economy.

FOMC members are likely to revise down their projections about the future hikes for 2016. If so, this could actually have a modest adverse impact on USD and bring up gold and silver – or at very least soften the blow of this month’s expected hike.

By the end of last week, gold holding of the gold ETF SPDR Gold Trust (GLD) declined again by 0.7%, week on week, to 634.6 tons of gold. Conversely, silver holdings for the silver ETF iShares Silver Trust (SLV) increased by 0.6% to 323.5 million ounces.

So where does it leave us?

It’s hard to see, as of now, the FOMC not moving forward and raising rates. If Chair Yellen doesn’t start raising rates this time, it will raise market volatility and could indicate the Fed isn’t confident about the progress of the U.S. economy. If the FOMC does hit lift off, even if the statement and press conference will offer a lot of dovish sweeteners to soften the hawkish move, gold and silver are likely to keep falling and U.S. dollar pull back up.