The change in direction of U.S. LT treasury yields along with the devaluation of the USD have pressured back up gold and silver. Is this turn of events suggests bullion prices are on their road to recovery? The minutes of the FOMC meeting, U.S. CPI for April will be the main events of the week. Other reports and events to consider include: RBA’s minutes of last meeting, Japan’s GDP for Q1, China’s manufacturing PMI, U.S. housing starts, Draghi’s speech, EU CPI, and Philly Fed survey. Here is an outlook for May 18-22, 2015:

The recent rally of gold and silver was mostly driven by the weakness of the U.S. dollar, the stagnation of the U.S. stock market and the sudden drop in long term treasury yields. The chart below presents the developments in the price of gold and 10-year treasury yield over the last few months. As you can see, the relation between the two data series is strong and negative, and suggests the two are related. 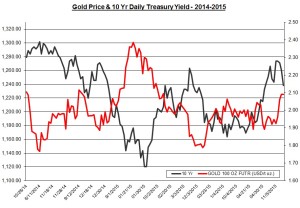 This means if the relation keeps holding up, then the ongoing progress in the LT treasury market could still play an important role in the direction of gold and silver.

The upcoming minutes of the FOMC meeting could stir up the bullion market again. Especially since the FOMC keeps a tight lid and no clear outlook about the timing of its next rate hike. The recent NFP report was better than in the previous month but still wasn’t too impressive, the GDP for Q1 didn’t show a strong growth, the U.S. inflation is still very low, and the stock market could start to be showing signs of slowdown – which also doesn’t create a good timing of raising rates. All these factors are likely to be considered by FOMC members, albeit the Fed’s two mandates – inflation and labor – are the ones that really matter of the final call about raising rates.

With forward guidance removed from the last statement all eyes will be on the minutes that could shed some light on the Fed’s next move. The market is still undecided on whether the FOMC will actually raise rates this year. The implied probabilities of a rate hike, based on the pricing of U.S. bonds, are now only 18% for a September hike and 51% for December – these figures are lower than last week.

Since the minutes could create, as they did in the past, more uncertainty than clarity, we could see high volatility in the gold and silver market. This also means both precious metals could go in either direction in the coming weeks.

Besides the release of the minutes the U.S. CPI for last month will also come out and show if there is any rise in inflation. Considering the price of oil picked up last month, we could see a rise in the CPI, but this doesn’t mean the core CPI increased as well. As of last month, the core CPI was still low at only 1.8%, which was below the FOMC’s 2% target. Any rise in core CPI could be a positive indicator for gold and silver. For now, inflation is still low and as such isn’t likely to move much bullion prices.

The ongoing weakness in the U.S. dollar accompanied by drop in LT treasury yields provided the backwind for the rise in gold and silver. All this could change, however, if the minutes of the FOMC meeting are perceived as more hawkish so that the Fed could start considering a rate hike in the coming meetings. Conversely, the depreciation of the USD is still keeping up gold and silver and could keep doing so. In any case the volatility in the bullion market could continue until the market gets a better grasp about the FOMC’s next move. I still think the market undervalues the Fed’s determination in raising rates this year, and, if this is the case, thus once it will become clearer, gold and silver could take a hit from this development. This scenario, however, could take a while until it sets in motion. Until then, bullion investors could still see short term gains of gold and silver but nothing to warrant a sustainable recovery for either of the precious metals.