The prices of precious metals haven’t done much on a weekly scale even through they have had a spike in their price volatility. Precious metals, much like in other financial securities such as other commodities and stocks, rose on the day after the New Year’s holiday. This rally came after the announcement from the Hill in which the Senate and later Congress approved the tax hikes on wealthy households in the U.S. By doing so, the U.S policymakers have averted the fiscal cliff. The U.S officials will still have financials issues to tackle by February, including raising the debt ceiling, and cutting spending from the Federal Budget. This short lived optimism from the agreement that was struck rallied the markets. On the other hand, the recent release of the minutes of the December FOMC meeting raised the speculations that the Fed might discontinue this year its asset purchase program. This report may have fueled the sharp drop in the prices of gold and silver on the last couple of days of the week.  Several U.S related reports were published during last week and may have also affected forex and commodities markets: U.S non-farm payroll rose in December by 155k; the U.S jobless claims rose by 10k to reach 362k. The U.S payroll report may have adversely affected gold and silver on Friday. Finally, the Euro/USD fell last week by 1.11%; the Canadian dollar and Aussie dollar, on the other hand, appreciated against the USD. The depreciation of the Euro may have also partly adversely affected precious metals prices.

Here is a short recap of the developments in precious metals prices between December 31st and January 4th:

The chart below presents the changes of precious metals, as their prices are normalized to 100 as of December 28th. Bullion prices started the week rising but then changed direction and sharply declined. 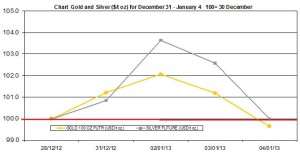 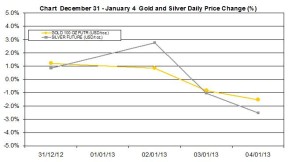