The prices of precious metals changed direction again and this time they have declined during the past few days of the week. The recent news of the rise in the imposed tax on gold imports in India may have contributed to the recent drop in the price of gold. Moreover, the positive news of the growth in the U.S economy including the rise in the manufacturing PMI in January, and the drop in the number of jobless claims may have also pulled down the prices of precious metals. The decision of the BOC to leave the rate unchanged and lower the expected GDP growth rate in 2013 may have pulled down not only the Canadian dollar but also precious metals.  Finally, the Euro/USD rose last week by 1.1%; the Canadian dollar and Yen depreciated against the USD. The depreciation of these currencies may have pulled down precious metals prices.

Here is a short recap of the developments in precious metals prices between January 21st and January 25th:

The chart below shows the developments of precious metals, as their prices are normalized to 100 as of January 18th. Bullion prices have had downward trend during the last few days of the week. 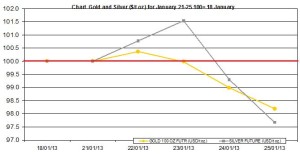 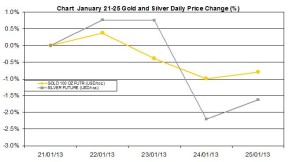