Here is a short overview for precious metals for Tuesday, December 17th: 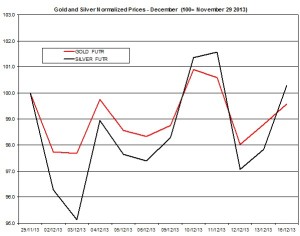 The ratio between the two precious metals fell again on Monday to 62.09. During December, the ratio slightly rose by 0.47% as silver has moderately under-performed gold. 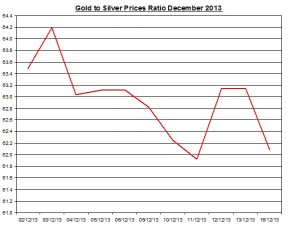 GB CPI (November 2013): In the previous monthly update regarding October 2013, the CPI fell to an annual rate of 2.2%; if the inflation rate continues its downward trend, it may eventually affect the BOE’s monetary policy;

Euro Area CPI: Based on the recent report, the annual CPI declined to 0.7%, which is well below ECB’s target inflation; if the inflation continues to decline, it could affect ECB’s monetary policy;

Euro-Group Summits: The summit will be held in Brussels; the EU ministers of finance and Euro-Group President may refer to the latest developments in Europe;

U.S Core Consumer Price Index: This monthly report refers to the main changes in the core consumer price index for November 2013. According to the U.S Bureau of Labor statistics, during October, the CPI inched down by 0.1% (month-over-month); the core CPI inched up again by 0.1%; this report could affect the USD and may also affect the FOMC’s monetary policy;

Governor Stevens speaks: Reserve Bank of Australia Governor is due to testify before the House of Representatives Standing Committee on Economics, in Canberra; this speech may affect the Aussie dollar;

Japanese Trade balance: Back in October 2013 the Japanese trade balance deficit slightly contracted to 1,071 billion yen (roughly $10.4 billion) deficit (seasonally adjusted figures). Japan is among the leading importers of commodities, including crude oil and gold; its trade balance could offer information vis-à-vis Japan’s changes in demand for goods and services;

On Monday, the Eur/USD currency pair slightly increased by 0.14% to 1.3761. During December, the Eur/USD increased by 1.25%. Further, other currencies such as the Canadian dollar also moderately appreciated yesterday against the U.S dollar by 0.10%. The correlations among gold, silver and Euro have weakened again in recent weeks, e.g. the correlation between the Euro/USD and gold price is only 0.18 during November-December – its lowest level in weeks. This could suggest the developments in the gold and silver market have little to do with the movement of the US dollar in the forex market against other leading currencies.