The prices of gold and silver tumbled down on the first day of the week. This may have been a strong correction to the sharp rise in bullion prices on Friday. Their recent drop coincided wit the moderate drop of the Euro against the USD. In the U.S, the manufacturing PMI rose again to 57.3 during November – a 0.9 percentage point compared to October. This means, the manufacturing sectors in the U.S are expanding at a faster pace. This positive news may have contributed to the weaker demand for gold and silver as investments. Will gold and silver recover from their recent tumble? On today’s agenda: Australian Retail Sales, Reserve Bank of Australia Cash Rate Statement, and GB Construction PMI.

Here is a short overview for precious metals for Tuesday, December 3rd: 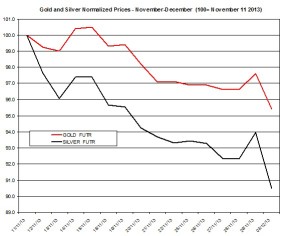 The ratio between the two precious metals increased on Monday to 63.48. During November, the ratio rose by 3.14% as silver has moderately under-performed gold. 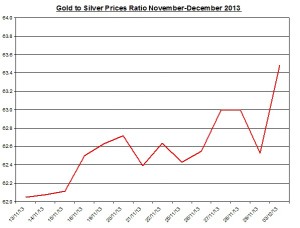 The gold and silver futures volumes of trade have declined and reached on Friday 128 thousand and 35 thousand, respectively. The volume of trade is likely to pick up in the coming days.

Australian Retail Sales: This monthly update will refer to October 2013. In the recent report, the seasonally adjusted retail sales rose by 0.8% during September; this news may affect the Aussie dollar, which tends to be correlated with gold;

Reserve Bank of Australia – Cash Rate Statement: The last time the RBA cut its cash rate was back in September. The current rate is set at 2.50% – its lowest level in years, which contributed to ongoing downfall of the Aussie dollar against leading currencies such as Euro and USD. The current expectations are that RBA will keep its cash rate flat in this upcoming rate decision;

On Monday, the Eur/USD currency pair fell by 0.36% to 1.3542. During November, the Eur/USD slipped by 0.36%. On the other hand, other currencies such as the Aussie dollar slightly appreciated yesterday against the U.S dollar by 0.04%. The correlations among gold, silver and Euro remained mid-strong in recent weeks, e.g. the correlation between the Euro/USD and gold price is 0.49 during November.  The chart below shows the linear correlations among leading currencies pairs and precious metals percent changes. 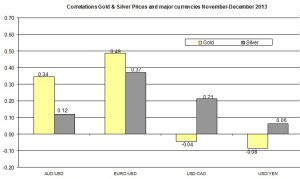 ← Will Chesapeake Start to Heat up Again?
Will Natural Gas Continue to Heat Up? →