The price of gold didn’t do much during January; silver price, on the other hand, bounced back from its tumble during December and rose during last month. The little movement in the price of gold on a monthly scale might suggest the market remains on the baseline and waits for the next big change in the market. The FOMC left its policy unchanged and continues with its $85 billion a month purchase program. The speculations around when will the Fed discontinue its monetary policy might keep impeding the progress of precious metals. In the meantime, the low inflation in the U.S, the slow improvement in the housing and employment, and the rise in long term interest rates (despite the Fed purchase program) is likely pulling down gold and silver prices. On the other hand, the recent negative growth in U.S economy (GDP for Q4 contracted by 0.1%) has plausibly influenced bullion traders and pulled up gold and silver rates. The main events in February, besides the regular financial report, include: the minutes of the January FOMC meeting; the deliberations of EU leaders’ vis-à-vis the EU multi year budget that could affect the Euro and commodities rates. Will gold and silver market wake up in February? The usual reports regarding the progress OF the main economies including U.S, China, and Europe are likely to influence bullion traders.

Let’s examine the precious metals market for January and give a short outlook for gold and silver for February.

Gold and silver rates slightly increased at the beginning of the month. Part of the rally may have been attributed to the low volume of trade and the decision of U.S policymakers to avoid/postpone the fiscal cliff. Despite the sharp rise in gold and silver at the beginning of the month, by the end of January, gold declined by 0.85%; silver rose by 3.85%.

Let’s divide January into two parts: the table below divides the month at January 15th; I divide the month to demonstrate the modest shift in the pace of both gold and silver; during the first part of January, gold inched up by 0.5%; silver rose by 4.4%. During the second part of January, silver decreased by 0.5%; gold price declined by 1.4%.

During the first part of January, the U.S dollar depreciated against the Euro, Aussie and Canadian dollar; the USD/CAD and AUD/USD currency pairs are usually strongly correlated with gold and silver prices. Conversely, during the second part of the month, the USD/CAD and AUD/USD changed course and the USD appreciated. The appreciated of the USD may have pulled down gold and silver.

The chart below shows the developments of gold and silver prices during January, in which the prices are normalized to 100 on December 31st 2012. 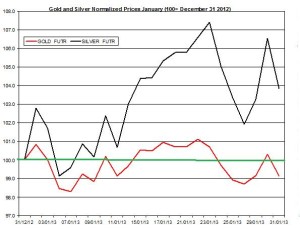 The next chart presents the movements in the ratio of gold to silver (gold price/silver price) during January; the ratio had a modest downward trend. The ratio fell as silver price has out-performed gold price. In the last week of January the ratio ranged between 55 and 52. 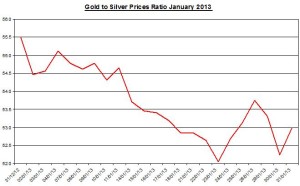 Here are several factors that may have pressured down of gold and silver prices during the month:

Here are several factors that may have pulled up gold and silver during the month:

In conclusion, I speculate gold and silver will start to pick up despite the very low volatility during January. The rise in the U.S money base, most like due to QE3, may start to pressure up bullion prices. The debate regarding raising the debt ceiling among U.S policymakers are likely to play in the background even though the debt ceiling deadline has been postponed to May. Conversely, if the U.S economy will continue to show progress in the labor, housing and manufacturing sectors (non-farm payroll report, housing starts and PMI manufacturing) this could curb the growth of bullion rates. The tax hike in India on gold imports might pull down the prices of gold via the decline in demand in this country. Conversely, the ongoing appreciation of the Indian Rupee is likely to positively affect the demand for gold in this country as it will lower the import price of gold. If the U.S stocks markets and other commodities such as oil will continue to rise this month, then they could pull up gold and silver. The recent drop in the GLD ETF amount of gold held might suggest the demand for gold as an investment has recently declined. But again if the market sentiment will change course then bullion rates might bounce back and rise during February. Finally, if major currencies including Euro and Aussie dollar will continue to appreciate against the USD, then this could also pull up gold and silver prices.

The full report is coming soon.