The prices of gold and silver remained virtually unchanged on Monday. The low volatility was also in other commodities and forex markets. There seems to be some progress in the talks between President Obama and House Speaker Boehner in tackling the fiscal cliff. The Japanese elections concluded with a victory for Shinzo Abe’s Liberal Democratic Party. This news may affect the yen and consequently other currencies and commodities. Will precious metals further fall today? Currently the prices of gold and silver are plunging. On today’s agenda: Great Britain CPI, BOE Inflation Estimate and Japanese Trade balance.

Here is a short outlook for precious metals for Tuesday, December 18th:

As seen below, the chart shows the developments in the normalized prices of precious metals during December (normalized to 100 as of November 30th). During recent weeks, the price of silver and gold slightly fell. 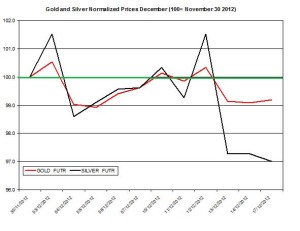 The ratio between the two precious metals rose on Monday to 52.69. During the month the ratio rose by 2.26% as gold slightly out-performed silver. 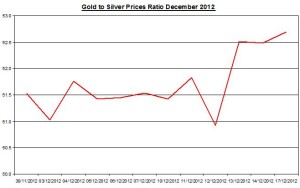 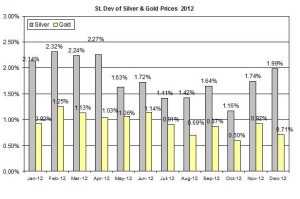 Great Britain CPI: in the previous update regarding October the annual CPI rose to 2.7%; if this trend will continue, it could lower the odds of the MPC expanding its asset purchase program; this news might affect the British pound, which is correlated with precious metals; during the month the linear correlation between gold and British pound reached 0.54;

BOE Inflation Estimate: this report will show the yearly rate of GB’s inflation according to Bank of England;  it will be published as a letter only if the inflation is exceed 3% or below 1%;

Japanese Trade balance: The Japanese trade balance deficit in October declined by 34.9% compared to September, and reach 624 billion YEN (roughly $7.9 billion) deficit (seasonally adjusted figures). This fall is due to the sharp drop in imports by 7.8%, and a modest fall in exports by 2.8%. Japan is among the leading importing countries of commodities, including gold; its trade balance could provide some insight about Japan’s changes in demand goods and services;

The Euro/ USD edged up on Monday by 0.01% to 1.3164. During the month, the Euro/USD increased by 1.37%. Conversely, some currencies such as Aussie dollar depreciated yesterday against the USD by 0.13%. The correlations among gold, Euro and Aussie dollar have weakened in recent weeks: during the past several weeks, the linear correlation between gold and Euro /USD was only 0.15 (daily percent changes); the linear correlation between the gold and AUD /USD was 0.11 (daily percent changes). This weak correlation might suggest the movement in precious metals in recent weeks didn’t coincide with the development in major currencies. Nonetheless, if the Euro and other risk currencies will rally against the USD, they are likely to pull up bullion rates.

Current Gold and Silver Rates as of December 18th

The prices of gold and silver remained virtually unchanged yesterday. Precious metals might bounce back as a correction to last week’s fall but this week’s direction is likely to continue to be downward. The low volatility might continue as the year is winding down and the holiday is right around the corner. The talks in Congress to resolve the fiscal cliff are likely to continue contributing to the movement of precious metals. The recent update on this front is that Obama and Boehner are getting closer to an agreement. Obama reduced the amount of new taxes to $1.2 trillion for the next decade. The decision of the FOMC may further weaken the US dollar, which will eventually contribute to the rally of bullion rates. The upcoming reports including: GB CPI and Japan trade balance could affect the British pound and Japanese yen, respectively. These currencies, in turn, may affect the movement of bullion.  Finally, if the Euro and other “risk currencies” will increase against the USD, they are likely to positively affect precious metals.