Silver had a big day yesterday, February 28th as it sharply rose by 4.5% – the sharpest gain for silver since January 3rd when it added 5.94% to its value. But, unlike yesterday’s gain, the rise in silver back then was prompted by the sharp increase in gold price when it rose by 2.15%. Yesterday gold price increase by only 0.76%.  So what is going on with silver? Will this rally last? And what could stop silver from reaching the $50 mark within the next few months? 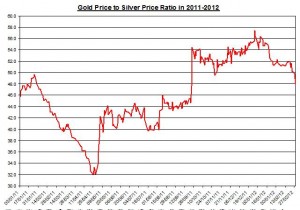 The forex markets might also be responsible for the recent rally in precious metals price, as many currencies such as Aussie dollar and Euro strengthened in recent months against the US dollar; these currencies are strongly related to precious metals. The recent news of ECB approving LTRO II might contribute to the developments in forex markets in the days to come. But again there weren’t sharp movements to explain such a sharp gain in silver more than in gold.

Recall that between February and April 2011 silver increased by nearly 80% and reached a record high of $48.6 on April 29th, 2011.  Back then it was mostly a matter of speculative money entering the silver market. The price soon plummeted during the first few days of May after CME raised the margins on silver to cool down the metals market.

The chart below shows the development of silver during 2011 and 2012. 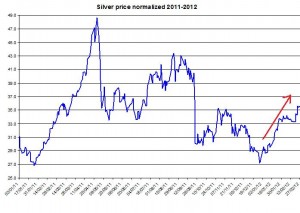 I suspect the same thing is currently occurring in the silver market – i.e. speculative money entering the silver market. This means if the silver market will heat again as it did during the beginning of 2011; it might prompt CME to raise margins again. The last time CME raised margins on silver and gold was back in September 2011. 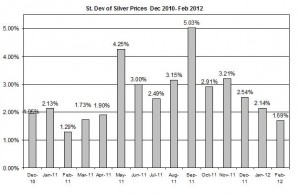 This figure lowers the chances for now for a CME market intervention, but if silver will start to rise again very sharply as it did back in 2011, a rise that won’t coincide with the developments in other financial markets such as commodities, metals and forex, CME might intervene again and will bring the silver rally to a halt.

1 comment for “Examining the Recent Silver Rally, Will It Last?”