Gold and silver continued to trade down for the second consecutive day. The recent news from U.S: GDP for Q4 expanded by 0.1%; this was a correction to the preliminary estimate in which the GDP was reported to have dropped by 0.1%. Moreover, jobless claims fell by 22k to 344k. These reports may have slightly contributed to the rally of the USD against several currencies and may have also dragged down precious metals. The sequester in the U.S will come into effect and starting March 1st, unless U.S lawmakers will act to circumvent it. This will include $85 billion spending cuts in 2013. If Congress won’t replace the sequester by the end of the year, it will continue and cut the U.S budget by $1.2 trillion in the next decade. This news didn’t seem to impress traders as the market didn’t seem to react to this news. Considering that the spending cuts account for only 0.5% of the U.S GDP or less than 10% of the expected federal budget deficit in FY 2013. In China, the manufacturing PMI report came out and showed a drop in the index from 50.4 in January to 50.1 in February – the lowest index in five months. This means the manufacturing sectors in China are expanding at a slightly slower pace. This news may adversely affect commodities prices. Will gold and silver bounce back today? Currently, the prices of gold and silver are edging up. On today’s agenda: German Retail Sales, GB Manufacturing PMI, Euro Area unemployment rate, Canada’s GDP by Industry, U.S. Manufacturing PMI and Bernanke’s Speech.

Here is a short outlook for precious metals for Friday, March 1st: 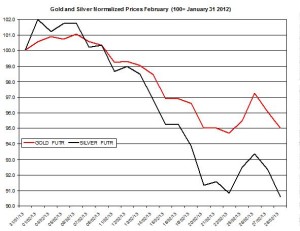 The ratio between the two precious metals inched down on Thursday to 55.12. During the month, the ratio rose by 4% as gold slightly out-performed silver. 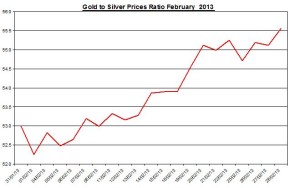 The gold futures volume of trade slightly rose on Thursday to 205 thousand while silver volume declined to 51 thousand. These numbers are lower than the volume traded on last week on Thursday. If the volume will continue to dwindle today, this might lead to a drop in volatility of the precious metal prices. The chart below shows the volume of trading gold and silver futures in the CME during the month. 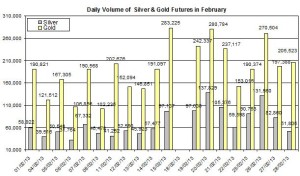 The Euro/ USD changed direction and fell on Thursday by 0.54% to 1.3068. During the month, the Euro/USD fell by 3.76%. Several other currencies such as the Japanese yen slightly appreciated yesterday against the USD by 0.3%. The recent movement of Euro and other currencies didn’t seem to affect precious metals. The correlations among gold, Japanese yen and Aussie dollar continue to weaken: during February, the linear correlation between gold and USD/ Japanese yen reached -0.32 (daily percent changes); the linear correlation between the gold and AUD/USD dropped to 0.16 (daily percent changes). These weak correlations might suggest the recent movement of gold and silver markets weren’t related or resulted from the changes in the foreign exchange markets.

Current Gold and Silver Rates as of March 1st

U.S. Manufacturing PMI: According to the previous report, during January 2013 the index rose to 53.3%, which means the manufacturing is growing; this index may affect foreign exchange and precious metals markets.

Bernanke’s Speech: Chairman of the Federal Reserve Bernanke will give a speech At the 2013 Banking Outlook Conference, Federal Reserve Bank of Atlanta in Atlanta, Georgia. The title of his speech is “Financial Institutions and Reputational Risk”.

German Retail Sales: This monthly report will present the changes in German retail sales during February. In January 2013, retail sales declined by 1.7% – lower than many had anticipated; if this report will drop again then it might weakened the Euro;

GB Manufacturing PMI: In the previous update regarding December 2012 the index declined to 50.8. This rate means the manufacturing sector is expanding at a moderately slower pace; this index might affect GB Pound;

Euro Area unemployment rate: the rate of unemployment of the Euro Area edged down by 0.1 pp to 11.7% in October. This mean there the unemployment remained stable and high. If in the upcoming report this trend will continue, it may adversely affect the Euro;

Canada’s GDP by Industry: the upcoming report will present the developments in major industrial sectors during December 2012. In the recent report regarding November 2012, the real gross domestic product rose again by 0.3%. This report may affect the path of the Canadian dollar, which is strongly correlated with precious metals;

What Could Impede This Gold Company?

Gold and Silver Outlook for February