The bullion market has changed direction and rallied on the first day of the week after gold and silver rate plummeted last week. Will gold and silver continue to rally? The minutes of the recent RBA monetary meeting came out and showed the factors behind the latest rate cut. Tomorrow the Fed will publish the minutes of the April/May meeting. Will the Fed surprise with talks about pulling down the QE program or will it keep the asset purchase program unchanged.  On today’s agenda: GB CPI and Bank of Japan Rate Decision, Outlook and Monetary Policy Statement.

Here is a short outlook for precious metals for Tuesday, May 21st: 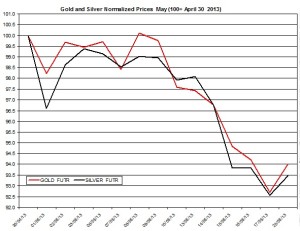 The ratio between the two precious metals increased on Monday to 61.32. During the month, the ratio edged up by 0.57% as gold slightly out-performed silver. 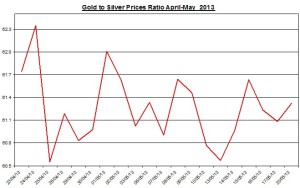 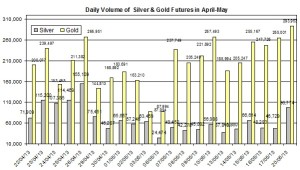 Agenda for Tuesday, May 21st

GB CPI (April 2013): This report may affect the direction of the British Pound currency. In the latest report regarding March 2013, the CPI remained unchanged at an annual rate of 2.8%;

Bank of Japan – Rate Decision, Outlook and Monetary Policy Statement: Bank of Japan will publish its interest rate decision, monetary policy for June and its outlook of the Japanese economy. In the past several weeks the Japanese yen tumbled down against the USD and Euro. If BOJ will further expand its current asset purchase program, this could drag down the Yen even further;

The Euro/ USD bounced back on Monday by 0.33% to 1.2893. During the month, the Euro/USD decreased by 2.17%. Moreover, other currencies such as the Japanese yen and Aussie dollar also rallied yesterday against the U.S dollar by 0.92% and 0.42%, respectively. The appreciation of these currencies against the U.S dollar may have partly contributed to the rally of gold and silver during yesterday. The correlations among gold, Canadian dollar and Aussie dollar remained strong and robust: during April and May the linear correlation between gold and USD/CAD reached -0.64 (daily percent shifts); the linear correlation between the gold and AUD/USD was 0.67 (daily percent shifts). If these correlations will continue to stand, the path of the Aussie, Canadian dollar and Euro are likely to partly affect precious metals.

Current Gold and Silver Rates as of May 21st

This week, Bernanke is expected to testify in Congress about the U.S economic outlook. This testimony along with the minutes of the latest FOMC meeting could offer some additional insight behind the future plans of the Fed regarding the QE program. This news is likely to also affect precious metals prices so that if the FOMC minutes or Bernanke’s testimony will hint of any plans to cut down the QE program in the near future, this could adversely affect precious metals prices. In the U.S several reports will be published including: core durable goods, new and existing more sales, and jobless claims. These reports will give a sense as to the progress of the U.S economy. If these reports will show growth, they could pull up the US dollar, which could adversely bullion rates. If leading currencies such as Euro and Aussie dollar will continue to fall against the USD, they could pull down precious metals. Further, if the Indian rupee will keep depreciating against the USD, it could lower gold imports into India. Since the beginning of the year, GLD’s gold holdings has tumbled by almost 23%; if this trend will persist, it could signal the demand for gold will continue to fall. Finally, if the stock markets will continue to rally, this may adversely affect the demand for precious metals as an investment.