Precious metals changed directions and fell yesterday. Their decline coincided with the rally of U.S equity markets. Conversely, the Euro and other leading “risk related currencies” also rose yesterday. Today, the Fed will publish the minutes of the April/May meeting. Bernanke will testify. Will Bernanke bring down the markets again with his economic outlook? According to a recent report by the Gold Council, the demand for gold in China and India rose again in the first quarter of 2013 by 20% and 27% (y-o-y), respectively. The rise in demand for gold as coins, bars and in Jewelry   wasn’t enough to pull up the total demand for gold that decline in Q1 2013 by 13%. The cause for the drop demand for gold   was the large outflow in ETFs that reached in Q1 177 tons. Doesn’t someone still think the demand for gold as an investment is on the rise? On today’s agenda: Minutes of April-May’s FOMC Meeting, Bernanke’s testimony in Congress, U.S. Existing Home Sales, China flash Manufacturing PMI , SNB Chairman Jordan’s Speech, GB Retails Sales, Minutes of MPC Meeting.

Here is a short outlook for precious metals for Wednesday, May 22nd: 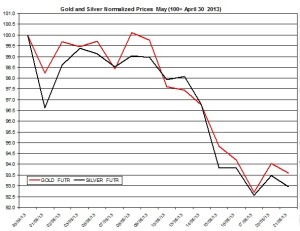 The ratio between the two precious metals increased on Tuesday to 61.32. During the month, the ratio edged up by 0.57% as gold slightly out-performed silver. 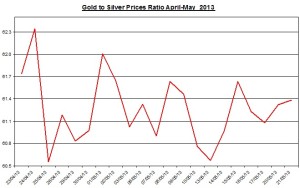 Agenda for Wednesday, May 22nd

Bernanke’s Testimony: Bernanke will testify this time before the Joint Economic Committee, U.S. Congress. The title of the speech is “Economic Outlook “. Bernanke’s testimony could stir up the market mainly precious metals markets;

Minutes of April-May’s FOMC Meeting: Following the April/May FOMC meeting, in which the Fed left its monetary policy unchanged, this news had little effect on commodities prices and forex markets. If the minutes will reveal the Fed’s intentions to consider easing down its asset purchase program in the next several months, this could drag down precious metals prices;

U.S. Existing Home Sales: in the previous report regarding March 2013 the number of homes sold slightly declined to a seasonally adjusted annual rate of 4.92 million houses;

GB Retails Sales: This report will show the changes in the retails sales in Great Britain for April 2013. It may affect the path of the British Pound currency. In the previous report regarding March 2013, retails sales fell by 0.7%;

German 10 Year Bond Auction: the German government will issue its monthly bond auction; in the previous bond auction, which was held at the middle of April, the average rate reached 1.28% – the lowest rate this year (UTD);

Minutes of MPC Meeting: in the recent MPC meeting, the Bank kept the rate flat at 0.5% and the asset purchase program at £375 billion; the MPC still has concerns regarding GB’s inflation. The minutes of last week’s meeting might offer some perspective regarding its monetary policy;

SNB Chairman Jordan’s Speech: the Swiss National Bank Chairman will give a speech; if he will announce or imply of any developments to the monetary policy of the SNB it could affect the Swiss Franc;

Canada Retails Sales: This report will refer to the retails sales in Canada as of March. It may affect the USD/CAD currencies pair, which is strongly linked with commodities rates. In the recent report regarding February 2013, retails sales increased by 0.7%.

The Euro/ USD slightly rose on Tuesday by 0.19% to 1.2906. During May, the Euro/USD decreased by 1.99%. Moreover, other currencies such as the Aussie dollar also rose yesterday against the U.S dollar by 0.33%. The appreciation of these currencies against the U.S dollar may have curbed the recent fall of gold and silver yesterday. The correlations among gold, Canadian dollar and Aussie dollar remained strong and robust: during April and May the linear correlation between gold and USD/CAD reached -0.64 (daily percent shifts); the linear correlation between the gold and AUD/USD was 0.69 (daily percent shifts). If these correlations will hold up, the direction of the Aussie, Canadian dollar and Euro are likely to partly affect bullion.

Current Gold and Silver Rates as of May 22nd

← Oil and Gold Slipped on Tuesday – Recap May 20th
Bernanke Talks – the Markets Fall – So What Else is New? →