Gold and silver prices tumbled down yesterday along with many other commodities rates and U.S stock markets. This negative sentiment is likely to shift as the EU Summit concluded yesterday with a decision to establish a united supervisory mechanism for EU banking system. It was also decided that struggling EU banks (including Spanish banks) will be bailed out by the EU rescue fund. The EU leaders also agreed to relinquish the condition that emergency loans to Spanish banks provide their governments preferred creditor status. The Euro/USD is already rising. This news is likely to pull back up not only the Euro but also bullion rates. It will remain to be seem what will be aftermath of this decision and how will it affect the stability of the EU. Yesterday U.S jobless claims nearly didn’t change; U.S GDP also remained unchanged at 1.9% for Q1 2012. Currently, gold and silver are rising.

Here is a short outlook for gold and silver for Friday, June 29th:

The chart below presents the normalized rates of these precious metals during June (normalized to 100 as of May 31st). 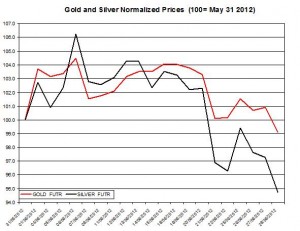 The ratio between the two metals increased again on Thursday to 58.97. During the month the ratio rose by 4.64% as gold has slightly out-performed silver. 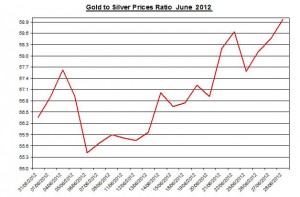 Euro Area Monetary Development: In the previous April report, the annual growth rate for M3 sharply fell to 2.5%. The M1 also decreased to 1.8%. Finally, the annual growth rate of loans to private sector decreased to 0.6%. If the M1 and M3 will continue to contract this could serve as another indicator for the declining inflation pressures in the  Euro Area, and it  may affect the future ECB interest rate decision;

German Retail Sales: In April 2012, retail sales increased by 0.6%; if this report will continue to be positive then it might strengthen the Euro;

KOF Economic Barometer: In the previous press release, the report predicted that the Swiss Economy is headed towards an expansion in 2012;

Italian 10 Year Bond Auction: the Italian government will issue a bond auction; in the previous bond auction, which was held at the end of May, the rate reached 6.03%;

Euro Area Annual Inflation: the inflation in Euro Area reached 2.4% in May. If the upcoming inflation rate estimate will continue to decrease, it may raise the chances of ECB lowering the interest rate;

Governor King speaks: The governor of Bank of England will give a speech; in his speech he could offer some insight in regards to the recent BOE interest rate decision and monetary policy; this speech may affect the British Pound trading;

Canada’s GDP by Industry: the report will present the changes in major industrial sectors for April 2012. In the previous report regarding March 2012, the real gross domestic product edged up by 0.1%. This report may affect the strength of the Canadian dollar exchange rate which is strongly linked with commodities prices;

The Euro/US Dollar decreased again on Thursday by 0.21% to 1.2443. During the month (UTD) the Euro/U.S Dollar increased by 0.62%. Further, other exchange rates including the Aussie dollar and CAD also depreciated on Thursday against the USD by 0.36% and 0.81%, respectively. The recent decision made by the EU leaders is likely to keep the Euro/USD rising and thus it is also likely to positively affect bullion rates on the last day of the month. Currently the Euro is sharply rising against the USD.

Current Gold and Silver Rates as of June 29th

Gold and silver tumbled down yesterday but today I speculate they are likely to bounce back; this comes after the EU Summit decided to tighten the supervision on the EU banks and in the same time bailout the banks with the rescue fund so a sovereign nation won’t have to raise funds to bailout its banking system (Spain).This might stabilize the EU and especially lower the risk on several countries that were faced with a collapsing banking system. This decision also means the EU leaders found a way to help countries such as Spain while circumventing the process of issuing EU bonds. This news is likely to dominate the news cycle and pull up not only the Euro but also commodities prices including precious metals rates. The upcoming EU reports might also affect (to a lesser degree) the Euro assuming there will be some significant changes. Finally Canadian GDP report could also affect the Canadian dollar which is strongly linked with bullion rates.