Gold and silver prices changed direction and bounced back during yesterday’s trading. On the other hand many other commodities such as crude oil and currencies including Euro and Aussie dollar tumbled down. The European debt crisis continues to weaken the Euro and it drags along with it other commodities and currencies. The Italian and Spanish bond sales didn’t go well and may have contributed to the markets’ decline.  The disappointing U.S pending home sales may have contributed to the rally in bullion rates. Currently precious metals prices are decreasing. On today’s agenda: German Retail Sales, Euro Area Annual Inflation, ADP estimate of U.S. non-farm payroll, U.S. GDP 1Q 2012, U.S. Jobless Claims, China Manufacturing PMI and FOMC Member Pianalto will give a speech.

Here is a short outlook for gold and silver for Thursday, May 31st: 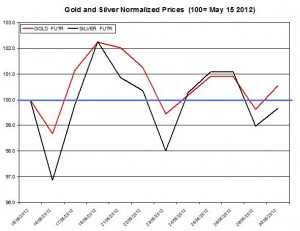 The ratio between the two metals edged up on Wednesday to 55.95. During the month the ratio increased by 4.28% as silver has moderately under-performed gold during the month. 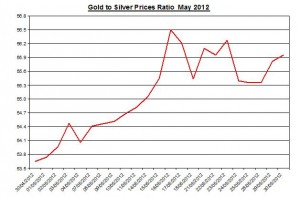 This report comes despite the rise in new and existing home sales in April.  This news may signal the housing market isn’t picking up.

Italian government issued another bond auction yesterday. Italy managed to sell only €5.73 billion out of the maximum target of €6.25 billion of five and ten year bonds.

Furthermore the 10 yr bond yield reached 6.03, which is higher than last bond sale’s yield of 5.84. This news may have also had been related to the tumble of the Euro during yesterday.

U.S. Jobless Claims Weekly Report: in the latest update the jobless claims didn’t change much at 370,000; this upcoming weekly report may affect the USD and consequently commodities rates;

German Retail Sales: According to March 2012, retail sales increased by 0.8%; if this report will continue to be positive then it could strengthen the Euro;

FOMC Member Pianalto Speaks: Following the recent FOMC meeting, the FOMC member Pianalto will give a speech. If he will hint of the future steps of the FOMC it might affect the financial markets;

China Manufacturing PMI: in the previous report for April 2012 the Manufacturing PMI rose to 53.3; this index indicates the developments in China’s manufacturing sectors; if this upward trend will continue, this may also positively affect commodities prices;

The Euro/U.S Dollar tumbled down its on Wednesday by 1.09% to 1.2367. During the month (UTD) the Euro/U.S Dollar declined by 6.6%. Furthermore, “risk currencies” such as the Australian dollar and Canadian dollar also sharply depreciated during Wednesday against the USD by 1.45% and 0.79%, respectively. If the U.S dollar will continue to rise against the Euro, it might also adversely affect bullion rates (even though this wasn’t the case yesterday). Currently the Euro is rising against the USD.

Current Gold and Silver Prices as of May 31st

Daily Outlook for May 31st

The sharp fall in the Euro and other commodities prices including WTI oil and natural gas didn’t coincide with the rise in gold and silver. The U.S pending home sales may have had some to do with the rise in bullion rates. Despite the rally in precious metals prices during yesterday there is still little evidence to support a shift in their trend.  The tumble of the Euro is likely to adversely affect bullion rates even though it didn’t seem to do so yesterday. There are many reports on today’s agenda: If the U.S reports will be positive and will meet expectations including U.S GDP, jobless claims then they are likely to adversely affect bullion. On the other hand if the Euro related news (German Retail sales, EU inflation) and China’s manufacturing PMI will be positive, it could positively affect not only precious metals but also other commodities rates.

← Oil and Natural Gas Tumbled Down on Wednesday –Recap May 30th
Oil Stockpiles Increased by 5.5MB– May 31 →