The prices of gold and silver shifted again in an unclear trend yesterday: gold inched down while silver rose. This unclear trend was also recorded in the currencies markets as the Euro appreciated against the USD while some other currencies such as the Aussie dollar depreciated against the USD. President Obama is trying to avoid automatic spending cuts that could come into play by March 1st. This debate might influence not only forex traders but also bullion traders. The U.S non-manufacturing PMI declined by 0.5 percent point during January to reach 55.2. This news means the non-manufacturing sectors in the U.S are growing at a slightly slower pace. Will gold and silver rally? Currently gold and silver prices are rising. On today’s agenda: German Factory Orders, and Australia Employment Report.

Here is a short outlook for precious metals for Wednesday, February 6th:

As seen below, the chart presents the shifts in the normalized prices of precious metals between January and February (normalized to 100 as of December 31st). During recent weeks, the rates of silver and gold have had an unclear trend. 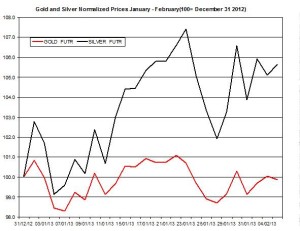 The ratio between the two precious metals slipped on Tuesday to 52.48. During the month, the ratio declined by 0.97% as gold slightly under-performed silver. 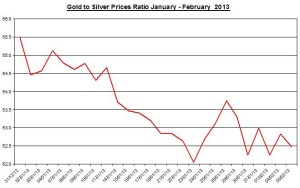 German Factory Orders: This report will refer to the changes in the factory orders of Germany for December; in the previous report the German factory orders fell by 1.8% (M-o-M);

Australia Employment Report: in the last report regarding December 2012 the rate of unemployment declined to 5.4%; the number of employed (seasonally adjusted) declined by 5,500 people; the number of unemployed rose by 16,600 during December compared to November. This report could affect the Aussie dollar (see here the recent report);

The Euro/ USD bounced back on Tuesday by 0.5% to 1.3583. During the month, the Euro/USD inched up by 0.03%. The Canadian dollar also appreciated against the USD. Conversely, some currencies such as Aussie dollar depreciated yesterday against the USD by 0.45%. The mixed trend in the forex markets in which the Euro and Canadian dollar rose while the AUD fell may have influenced precious metals traders. The correlations among gold, Canadian dollar and Aussie dollar were mid-strong in recent weeks: during January/February, the linear correlation between gold and USD/CAD reached -0.4 (daily percent changes); the linear correlation between the gold and AUD /USD reached 0.47 (daily percent changes). From these correlations we might infer the recent shifts of gold and silver were partly affected or resulted from the changes in the foreign exchange markets. If the Euro and other risk currencies will appreciate again against the USD, they might pull up gold and silver. The table below shows the linear correlations among precious metals and leading currencies pairs. 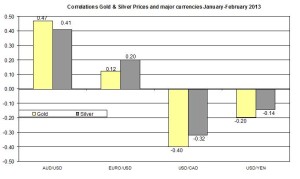 Current Gold and Silver Rates as of February 6th

Prices of precious metals remained nearly unchanged in the past couple of days. The prices might start to pick up and rally as the week will progress. The busy business day tomorrow might bring back some of volatility in the commodities prices. The main events tomorrow will revolve around the rate decisions by ECB and BOE. Until then the low volatility and low volume of trade might continue during the day.  The talks among U.S policymakers regarding the forthcoming automatic budget talks that could come into play as early as March 1st might start to influence bullion traders and pressure the prices of gold up.  The upcoming repots regarding the German factory orders and Australia’s employment might affect the Euro and Aussie dollar, respectively. These currencies, in turn, might affect the direction of gold and silver during the day. If these currencies will trade up against the USD, they may also pressure up gold and silver rates.