Gold and silver prices declined again yesterday and thus both metals were traded down in eight out of the ten business days in May (so far). The speculation around the next move in the EU following the shift in the political climate in Greece keeps the Euro weak and thus may also been among the factors to pull down commodities prices including precious metals prices.Update: Greece is heading for another elections.

Here is a short outlook for gold and silver prices for Tuesday, May 15th:

The chart below presents the normalized prices of precious metals during month so far (both metals rates are normalized to 100 as of April 30th). 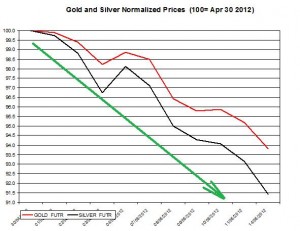 The ratio between two precious metals continued its upward trend as it reached yesterday 55.06. During the month the ratio rose by 2.61% as silver has moderately under-performed gold during the month. In the chart below are the shifts of this ratio during May. 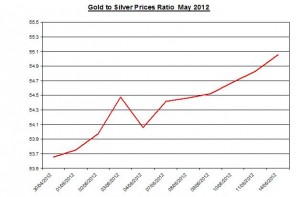 U.S Core Consumer Price Index: In the latest U.S PPI report the PPI fell by 0.2%, while the core PPI rose by 0.2%. This might suggest the same may occur in the upcoming CPI report. This might affect the US dollar and in turn commodities prices;

Euro Area GDP 1Q2012 Report: (update: EU GDP didn’t expand but Germany’s GDP rose by 0.5% in Q1 2012) This report will present the developments in the economic growth in these countries; Euro Stat will also publish the GDP growth rate of the Euro Area. According to the previous report, during the fourth quarter of 2011, the Euro Area GDP contracted by 0.3% (Q-o-Q). The current expectations are of another a low growth rate or even another contraction for the first quarter; if there will be another contraction, then this could have an adverse effect not only on the Euro but also precious metals prices;

German ZEW economic sentiment: During April the ZEW indicator for Germany slightly rose to 23.4; as Germany’s economy is keep showing progress, the Euro will plausibly remain strong against other currencies;

U.S. TIC Long Term Purchases: The Treasury International Capital report will show the main changes in the purchases and sales of US long term treasuries in March 2012. In the previous February report, the net foreign sales of U.S Treasuries longer-term notes reached $10.1 billion;

The Euro/U.S Dollar fell again on Monday by 0.73% to 1.2823 – the lowest level since mid-January 2012. During the month (UTD) the Euro/U.S Dollar pair declined by 3.14%; furthermore, the Aussie dollar also depreciated on Monday against the U.S. dollar by 0.61%. Since these currencies pairs are strongly and positively linked with precious metals prices, if the U.S dollar will continue to trade up against these currencies; this may further pull down bullion prices. Currently the Euro is rising against the USD.

Current Gold and Silver Prices as of May 15th

Daily Outlook for May 15th

Gold and silver continue their downward trend and I speculate precious metals prices might continue their descent during the day. The U.S CPI report (mainly the core CPI) may affect the bullion markets if there will be a sharp shift in this index. The situation in Greece will keep the anxiety levels in the markets high so that the Euro might continue to show weakness against the USD and thus might drag along with it metals prices. Finally, the results of  the Euro Area GDP especially the better than expected Germany’s GDP growth rate  in Q1 2012might curb  (or even slightly reverse)  the recent fall of  not only the Euro/USD pair but also the bullion prices.

Here is a reminder of the top events and reports that are planned for today and tomorrow (all times GMT):

← Gold Silver and Oil Started off the Week Falling–Recap May 14th
U.S CPI Remained Unchanged in April – May Report →