According to the recent Energy Information Administration petroleum report, the U.S. oil rigs count passed the 1,000 mark for the first time ever. The number of rigs may serve as a lagged indicator for the changes in crude oil and natural gas prices. The EIA report demonstrates the relation between the rig count and crude oil prices.

Here is a weekly review of the U.S. oil and petroleum market including crude oil price and petroleum, oil and gasoline stockpiles for the week ending August 12th:

The chart below shows the petroleum and oil stockpiles levels compared to the WTI crude oil prices during 2010 and 2011. 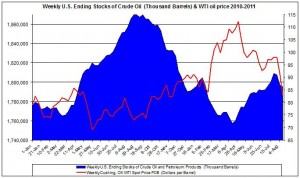 Petroleum production and imports (for the week of August 12th)

The four week average of US production (million of barrels a day) for the week of August 12th reached 5.498, which is lower by 0.1% compared with the previous week’s, but is 2.2% above the average production at the same time last year;

Below is a detailed recap of the information listed above (for the week of August 12th):

The average U.S. gasoline retail price fell for the second consecutive time in six weeks by seven cents per gallon compared with the previous week’s average; it reached $3.60 /g, which is $0.86 /g higher than the same period in 2010.

The national average Diesel prices declined for the third consecutive week by six cents compared with the previous week; it reached $3.84/g. which is $0.86/g higher than last year’s average price at same time.

A detailed analysis on crude oil price for the week of August 12 is herein.

Propane stocks continue to stock up and they have recently passed the 50 million barrels mark; last week, the stocks increased by 787 thousand barrels – a 1.59% increase – reaching 50.382 million barrels.