The recent heat wave in the Northeast is probably among the main reasons for the recent rally in natural gas prices.

Here is a summary of the recent U.S natural gas market EIA report regarding the week ending on June 3rd:

This rise in storage was primarily due to a 49 Bcf injection into the Eastern Consuming Region natural gas storage. 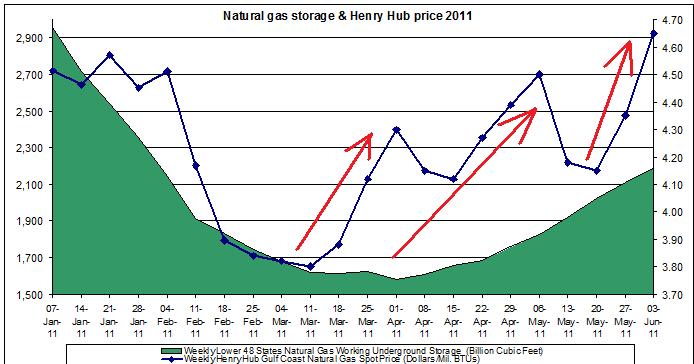 The U.S. natural gas supply remained high, but the production fell by less than half a percent at an average above 64 Bcf/d.

According to the report the natural gas rig count inclined by 6 during the week to reach 887.

The US temperatures continued to incline and reached a weekly average of 69.9 degrees, which were 3.3 degrees warmer than the five year average for the week ending on June 2nd, but were slightly cooler than last year by 1.3 degrees.

Natural gas spot price (Henry Hub) inclined during that week by 1.94% and reached to an average price of 4.65$/mmbtu; its average daily change was 2.03%, and its weekly average was 6.99% above the previous week’s average price.

The Nymex Henry Hub Future Price (July delivery) also inclined by 0.94% during that week, and its average price was 7.27% below last week’s average price.

A detailed analysis about natural gas spot price for the week of June 3rd is herein.