This passing week continued to revolve around the ramifications of the recent tsunami on Japan and the Libyan turmoil.  These news items caused turbulence in the financial markets and might have affected the crude oil market as (for more on these subjects see here).

Following the tsunami attack on Japan from Friday, March 11th, there are reports of over 19,000 casualties or missing people. The main concern now is the stabilization of the nuclear reactor Fukushima.

In Libya the Allied forces of Europe and US started their attack on Qaddafi‘s forces as they have unleashed their warplanes in the largest scale of military operation in an Arab country since the 2003 Iraq invasion.

Despite the turmoil in Libya and Japan during last week, crude oil prices started off the week with drastic falls, but then they bounced back with rises, and in the end of the week WTI and Brent oil had little price change on a weekly scale.

Here is a weekly recap for the week ending on March 18th on crude oil prices, recapping the highlights in the recent EIA petroleum report and the effects of the news from Libya and Japan on the oil market:

NYMEX Futures Price (future for April) much like WTI spot price, fell by 0.12% from beginning to end of the week as it settled on 101.07 $/ on Friday.

These figures show that WTI (spot and future) price are at a lower price level than they were in the previous week, however at the end of the week crude oil price didn’t change much compare to the beginning of the week.

This shows that the turmoil in Libya and Japan didn’t sustain their adverse affect on oil prices so far.

Europe Brent spot price also declined by 2.13% in its weekly average price compare to previous week’s average price, but rose by 1.2% from beginning to end of the week.

The gap between the Brent and WTI spot prices was on Friday 13.23$/b. 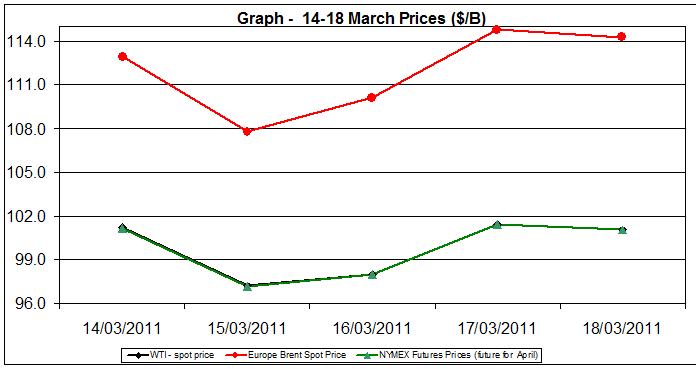 The chart above shows that WTI and Brent prices didn’t change much on a weekly scale despite their sharp fall at the beginning of the week. 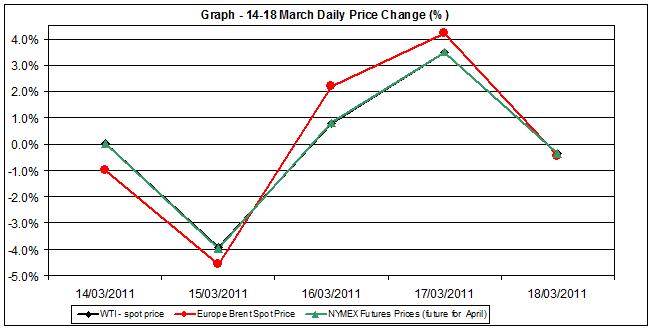 The graph above shows the erratic behavior of Brent oil and WTI prices.

In my recent review on last week’s EIA report petroleum stocks, consumption and production in the US, oil stocks falling for the fifth straight week; last week they have declined by 0.3%, a decrease of 5.1 million barrels of crude oil to reach 1,766 million barrels – the lowest level since March 2010.

The average US productions (million of barrels a day) for the week of March 4th was 5.601 on a four week average, at the same level as last week, and higher by 1.7% compare to the average production at the same time last year;

In total, there was a fall in petroleum stocks, imports and refineries inputs, a rise in oil prices and US production remained unchanged.