The highly anticipated FOMC meeting will take place this week. The main issue that many expect is whether the FOMC will start tapering QE3 soon. Many expect the FOMC could start tapering by roughly $10 to $25 billion a month of its asset purchase program.

According to Google Trends, the sharp increase in search results for the term “tapering” suggest people more suspect the Fed may taper QE3 in the upcoming FOMC meeting. Keep in mind, however, market expectations were wrong in the past. But for now tapering seems to be high probability scenario.

If this is the case, the Fed’s decision is likely to strengthen the USD and even pull back down gold and silver prices. But since the Fed’s long term treasury purchase program seems to have had little positive effect at best on the labor market and progress of the U.S economy, this decision to taper QE3 is reasonable.

Some hold the progress of the U.S labor market as sufficient evidence for its improvement: The rate of unemployment tumbled down from 9.7% in early 2010 to 7.3% as of August 2013 – a 2.4 percentage point drop. This decline, however, is less impressive when we take into account the 1.5 percentage point decline in labor force participation rate – as indicated in the chart below. 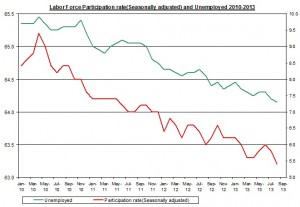 In times of economic slowdown, this trend is expected, in which people give up of looking for jobs and go out of the labor force. If we were to assume today’s participation rate similar as at the beginning of 2010 – at 64.7%, then the rate of unemployment would be around 9%.

The tapering is likely to progress and could mean that by the beginning of middle of 2014 the purchase program will end. The more interesting question will be the Fed’s next move. Will Bernanke’s final days in office hold him back from putting new plans on the table? Will he wait for policymakers in Congress and Senate to make their move in jumpstarting the economy? Will the Fed take the risk of implementing new plans that could shake the financial markets and might even raise concerns? These questions are likely to keep the uncertainty high in the markets.