The U.S. employment report was published today, June 3rd by the Bureau of Labor Statistics published regarding May 2011.

The report didn’t present good news for the progress of the U.S. economy:

The labor force rose at a much slower pace than in the past few months, as the number of non-farm employees increased during May by only 54,000 compared with an increase of 244,000 during April. The recent increase was mainly in the professional and business services, health care and mining sectors.

Thus the U.S. unemployment rate didn’t change much and increased by only 0.1 percent point during May, from 9.0% in April to 9.1% in May (as seen in the chart below).

Furthermore, the number of unemployed persons (13.9 million) didn’t change much during May. 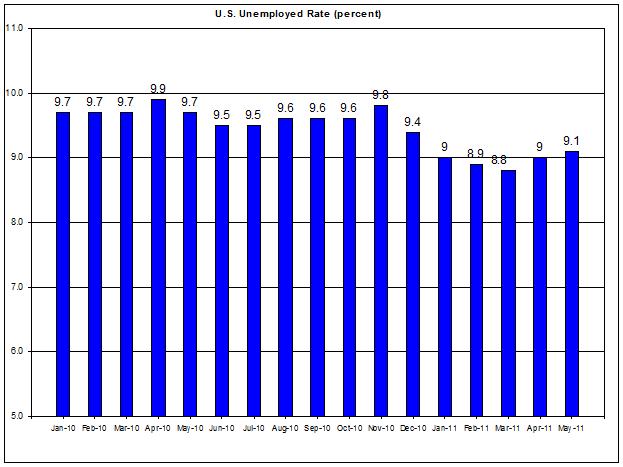 Now let’s breakdown how this recent news could affect the commodities markets in particular the demand for crude oil:

The U.S. economy didn’t show improvement in the labor force during May; this might suggest that the demand for energy products such as crude oil and natural gas didn’t incline beyond seasonality adjustments in the industry market.  Furthermore, this doesn’t show well on the future demand for major energy commodities in the U.S.

One of the industries that demand for energy commodities such as oil, coal and natural gas, is the manufacturing industry.

One reason the demand for gold as an investment was driven up in recent years was due to the drop in trust of many investors in US dollar based investments such as Government Treasury Bonds (the low interest rates obviously didn’t make these investments any more appealing).

This report doesn’t show well on the U.S. economy and might further drive the U.S. dollar down, which might push gold prices up.