The U.S. employment increased by a higher rate than many had anticipated during October: according to the recent U.S. employment report, which was published today, November 2nd by the Bureau of Labor Statistics the number of non-farm employees grew by 171,000. The main sectors that expanded during October were in professional and business services, health care and in retail trade.

The rate of unemployment edged up to 7.9%. Gold and Silver prices are declining along with other commodities rates.

The chart below presents the revised figures of the number of non-farm employees added to the labor market during the past couple of years (up to October 2012). The change in non-farm payroll was revised up for August from +142k to +192k; For September it was revised from +114k to +148k. The revised up figures for August and September suggest the employment situation in the U.S has improved in the past couple of months more than earlier thought.

As I have calculated in the past, the number of non-farm payroll employment needed to be added to the U.S labor market on an average monthly scale to keep up with the growth of the U.S. civilian work force is at least 107k (see red line in the chart below). This means that the recent sharp rise in employment in recent months were higher than this threshold. Further, this also means that the number of jobs added in October more than surpassed this figure. 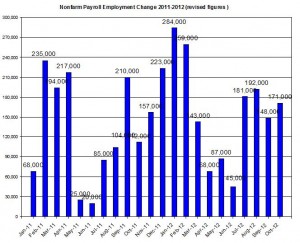 Following this news currently, the Euro to US dollar exchange rate is falling along with the GBP/USD; crude oil price is falling while the U.S stock market indexes are increasing; gold price is declining.

As I have already showed in the recent gold and silver prices monthly report, historically, as the non-farm payrolls expand by at least the population growth rate (roughly 107k), gold price tended to fall; this correlation was mostly due to the effect this news has had on the speculation of further stimulus by the Fed. 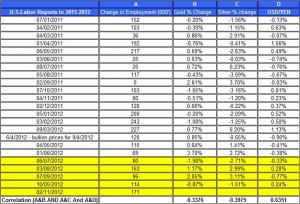 The recent increase in the non-farm employment is higher lower than some had anticipated and is well above the 100k mark which is a positive sign for the recovery of the U.S. economy from the perspective of the U.S’s work force. This positive news could help rally the price of crude oil – or at least curb the fall.