The Bureau of Labor Statistics released its monthly report: Total U.S. employment improved as expected: According to the ADP report, private non-farm payroll rose by 215k during November: The recent U.S. employment report, which was published yesterday, December 7th, the total number of non-farm employees rose by 203,000. The main sectors that grew during November were in transportation and warehousing, health care, and manufacturing. The rate of unemployment fell to 7%. The increase in employment exceeds the natural growth of workforce. Nonetheless,, since the employment situation has improved as anticipated, this news didn’t seem to have much of an effect on precious metals prices. Other commodities prices and the major stock markets are rallied.

The chart below shows the revised figures of the added number of non-farm employees in the labor market in recent years (up to November 2013). The non-farm payroll was revised up for September from +163k to +175k; For October it was revised up from +204k to +200k. The combined added jobs in those months were 375k – only 8k more jobs than previously estimated. The revised figures for September and September suggest the employment situation in the U.S was close to the numbers previously estimated.

As I have analyzed in the past, the minimum number of non-farm payroll employment needed to maintain the employment unchanged (to compensate with the growth of the U.S. civilian work force) – is roughly more than 100k. So the recent sharp increase in number of jobs was much higher than its threshold. 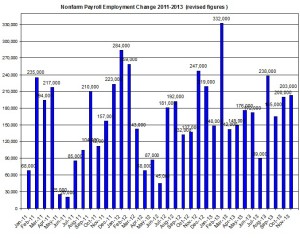 The table below shows the correlation between the news of the U.S. non-farm payroll employment changes and the daily shifts in gold and silver prices on the day of the U.S. labor report publication. 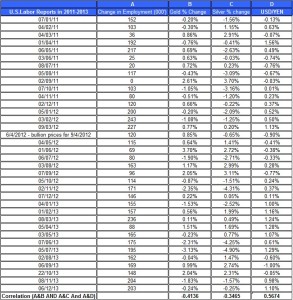