The U.S. labor force sharply grew again during January: according to the recent U.S. employment report, which was published today, February 3rd by the Bureau of Labor Statistics the number of non-farm employees grew by 243,000 – the highest increase since February 2011. The main sectors that rose during January were in professional and business services, leisure, and manufacturing. 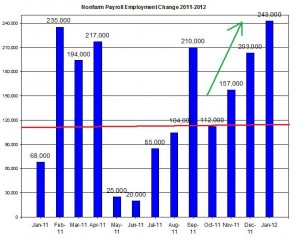 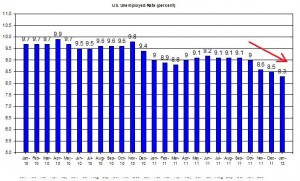 Furthermore, the number of unemployed persons (12.8 million) sharply fell in January by nearly 300 thousand from December.

As I have calculated in the past post, the average number of jobs needed to be created on an average monthly scale to keep up with the growth of the U.S. civilian labor force is at least 107,000 (see green line in the first chart above). This means that the increase in employment during January more than reaches this number.

Following this news currently, the Euro to US dollar exchange rate is trading down along with the GBP/USD; crude oil price is slightly rising while gold price is declining.

As I have already reviewed in the February gold price monthly report, historically, as the non-farm payrolls grew gold price tended to decline; this correlation was mostly due to the effect this news had on the U.S dollar; the news of the sharp increase in the U.S. labor force during January could consequently curb the recent rally of gold price.

The table below presents the correlation between the news of the U.S. labor report and the daily changes in gold and silver prices on the day of publication. 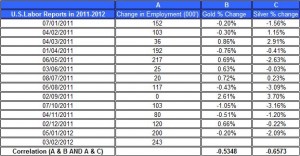 The growth in the non-farm employment is a positive sign for the progress of the U.S. economy in regards to its labor force and provides some signs of slow recovery; thus this news may also reflect an expected growth in U.S. demand for crude oil, and consequently may pressure crude oil prices up in today’s trading.