The bureau of economic analysis published today February 28th its second estimate of the growth rate of the U.S. Gross Domestic Product for Q4 2012. Based on the recent update, U.S output of goods and services growth rate rose by an annual rate of 0.1% in Q4 2012. This modest growth came after the US GDP grew in the third quarter by 3.1%. This little growth in GDP is related to the 14.8% drop in real federal government consumption expenditures. Since the first estimate lower, this news is a slight improvement, which could drag down gold and silver prices.

Therefore, the recent update is better than the first estimate but is still lower than the growth rates in the previous quarters.

This low growth in GDP in the fourth quarter of 2012 seems to stem from the decline in government spending including a 22% drop in national defense spending. This report may also affect the Fed’s monetary policy as it shows the U.S economy isn’t progressing.

The chart below presents the developments of the real U.S. GDP (in annual rates) growth rate between 2009 and 2012.  As seen, the recent drop in the real GDP means the growth rate in the fourth quarter was the lowest rate since the second quarter in 2009. 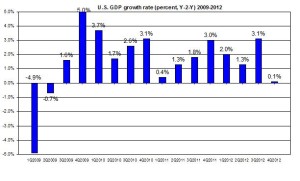 This lower than expected growth rate may pull up the prices of gold and silver: it may raise the demand for safe haven investments.