The U.S. Bureau of Economic Analysis reported that the U.S. GDP annual growth rate rose by 1.8% in annual terms during the first quarter of 2011.   This is an early estimate of the growth rate that might change in the upcoming reports. This is a decline from the fourth quarter growth rate of 3.1% as seen in the chart below.

The Federal Reserve has also pledged to follow through on its stimulus plan of purchasing US bonds worth of 600 billion US dollar by the end of June 2011. It was also reported that the Fed will keep the current low interest rate of 0 to 0.25%. 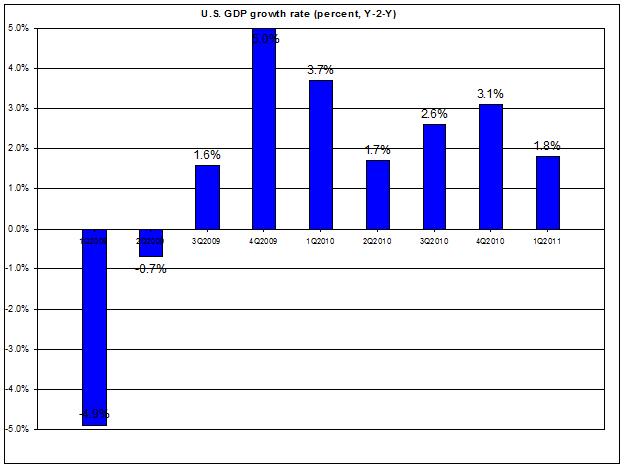 Let’s breakdown how this recent news could affect the commodities markets in particular the gold and silver prices:

The recent news above just show that the U.S. economy is still struggling to get out of its economic slowdown, and the Fed will keep on trying to stimulate the U.S. economy even if it will devalue the US currency.

The downside is clear: as the US dollar depreciate against major currencies, prices of major commodities rise; furthermore, traders and inventors also hedge against the decline in US dollar by purchasing gold and silver, which causes their prices to rise.