In the recent report of the Bureau of Labor Statistics, the U.S inflation for October 2011 slipped by 0.1% and in annual terms it rose by 3.5%. The consumer price index without food and energy also rose by 0.1% during October and 2.1% in the past twelve months.

The prime reason for the decrease in the U.S. consumer price index was related to the energy index that sharply declined by 2.0% (M-2-M) during October. In annual terms the energy index increased by 14.2%; among the energy products, the gasoline prices led the fall with a 3.1% decrease during the month; this decrease erases the 2.9% increase that was recorded back in September. The recent decline in the gasoline prices during October was mostly exogenous to the U.S economy and there were indirect events that may have affected the price of gasoline such as changes in stock markets and the changes in U.S dollar against the risk currencies such as Canadian dollar and Euro.

The core US inflation (CPI without energy and food) on the other hand slightly inclined by 0.1% during October and rose by 2.1% during the past 12 months.

The report also showed, an increase in food index by 0.6% during September and in annual terms food index increased by 4.7%. 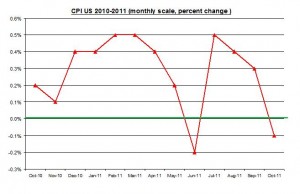 This news may affect the US dollar, and consequently also affect gold silver and prices.