The US’s employment report was published today, May 6th by the Bureau of Labor Statistics published about the April 2011.

According to the recent report, the labor force rose at a similar pace as it did the preceding month, as the number of non-farm employees increased by 244,000. The rise was mainly in the service-providing industries mining, and manufacturing. 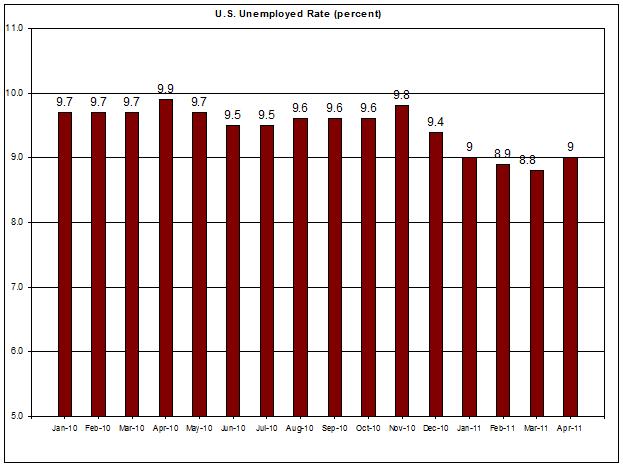 To give some perspective on the numbers, let’s calculate an estimate of the jobs needed to be created this year just to prevent a rise in unemployment:

The annual US population growth rate  is 0.97%, the labor participation rate (as of 2009) is 65%, and the US population in working ages of 16-65 is 205 million people; given these numbers, the average jobs needed to be added this year just to preserve the current unemployment rate, should be 1.94 million (205*0.97%*65%), and on monthly scale an average 107,000 jobs. Since the labor report superseded this figure – the US economy on average didn’t raise the unemployment rate.

Now let’s breakdown how this recent news could affect the commodities markets in particular the demand for crude oil:

The U.S. economy showed some improvement in the labor force; this might suggest that the demand for energy products such as crude oil and natural gas didn’t rise beyond seasonality adjustments in the industry market.

One of the industries that demand for energy commodities such as oil, coal and natural gas, is the manufacturing industry.

Nonetheless, crude oil prices are currently traded very high, and this report shows moderate improvement in US economy, therefore this news might reduce a bit the currently high oil prices (from speculative point of view and not from supply and demand perspective).

One reason the demand for gold as an investment was driven up during April was due to the drop in trust of many investors in US dollar based investments such as Government Treasury Bonds (the low interest rates obviously didn’t make these investments any more appealing). The recent incline in US dollar compared to major currencies, had the biggest effect this month so far on gold prices. This news might further raise the US dollar and if so, will continue to devalue the metals’ prices such as gold and silver prices.