The latest Bureau of Labor Statistics monthly report showed total U.S. employment rose 217K – close to market expectorants.  According to the ADP report, private non-farm payroll grew by 179k during May. According to the recent U.S. employment report, the main sectors that grew during May were in professional and business services, services and drinking places, and transportation and warehousing. The rate of unemployment remained at 6.3%. The growth in employment was higher than the natural growth of workforce.

The chart below shows the revised figures of the added number of non-farm employees in the labor market in past years (up to May 2014). The non-farm payroll fell in April from +288K to +282 K. For March, the employment remained at +203K. The combined lost jobs in those months were 6K – roughly 36k more jobs than previously estimated. The revised figures for March and April suggest the employment situation in the U.S was changed much from previously estimated.

As I have showed in the past, the minimum number of non-farm payroll employment needed to maintain the employment unchanged (to compensate with the growth of the U.S. civilian work force) – is around 100K. So the recent rise in number of jobs was much higher than this threshold. 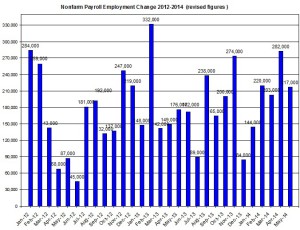 In May, the rate of U.S. unemployment remained at 6.3%. Some analysts estimated the rate to edge up to 6.4%. The current unemployment rate is 1.3 percent points lower than its rate in May 2012.

As I have already pointed out in the recent gold and silver monthly report, historically, if the non-farm payrolls increase by a higher than the population growth rate (roughly 100K), gold and silver prices tend to fall. This time, the rise in employment was inline with forecasts and yet precious metals rallied.

The table below shows the correlation between the news of the U.S. non-farm payroll employment changes and the daily changes in gold and silver priceson the day of the U.S. labor report publication. These correlations, however, don’t always hold up, as indicated in the recent report. 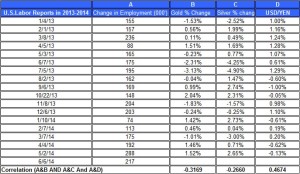