The U.S. non-farm payroll presented a gain of only 160K jobs in April compared to the ADP’s anticipated increase of 156K jobs and market expectations of 203K. The growth in wages picked up again to 2.5% as wages increased by 8 cents, month over month. The main sectors that expanded were in professional and business services, health care, and financial activities, while jobs were lost, yet again, in the mining sector. The rate of unemployment remained flat at 5%. The U.S. dollar is currently falling against other majors; gold and silver are rising. Let’s breakdown this report:

The U6 unemployment measurement, a broader measure of unemployment, edged down again to 9.7%. In terms of revisions, there was a total downward revision of 19K for March and February combined. 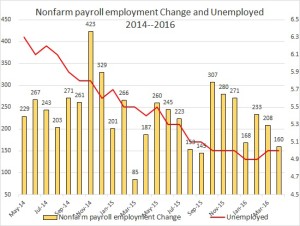 In April, the rate of U.S. unemployment was 0.4 percent points below the rate recorded in April 2015.

Finally, wages rallied in April compared to March – the hourly earnings reached $25.53 per hour — a gain of 8 cent or 0.3%, month over month; wages increased by an annual rate of 2.5%, year on year – a slightly faster rate than in previous month.

The headline figure of the NFP report came short of market estimates. And considering the participation rate also declined, this report may be perceived bearish by the market. But since wages picked up again – to an annual rate of 2.5%; and since real unemployment ticked down; at least the labor market might be ready for a rate hike. And a slower growth in the labor market is bound to happen as the market gets closer towards full employment. Nonetheless, as long as inflation remains low and risk of global economic slowdown doesn’t fall; the Fed isn’t likely to move with a rate hike in the near term.