In this week’s Energy Information Administration petroleum report there is an analysis of the recent high volatility in the crude oil market: the sharp falls that were recorded in the WTI and Brent oil prices in recent weeks have more to do with the change in sentiment of oil traders of the oil market, and less to do with the changes in the fundamentals’ conditions. This shift is stem, in part, from the revised down economic growth in the US, the macro economic uncertainty over the US debt ceiling talks and the recent downgrade of US credit rating by Standard & Poor’s.

Here is a weekly review of the U.S. oil and petroleum market including crude oil price and petroleum stocks for the week ending August 5th:

U.S. Petroleum and oil stocks sharply declined during last week by 10.73 million barrels, or by 0.59%; this is the sharpest fall since February 18th, 2011. For the week ending on August 5th crude oil stocks reached 1,796 million barrels.

The chart below shows the petroleum and oil stocks levels compared to the WTI crude oil prices during 2010 and 2011. 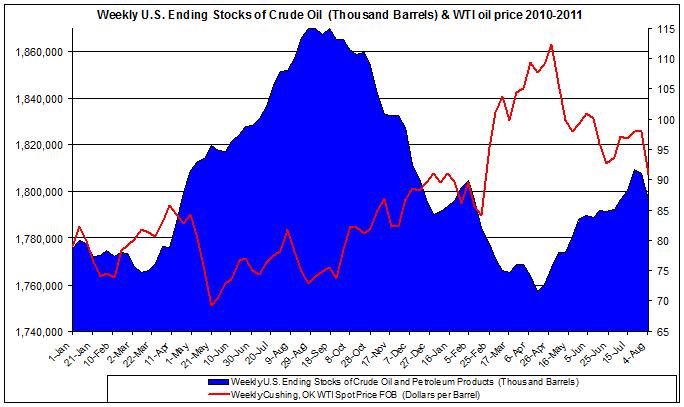 It shows the sharp fall in WTI spot oil price during last week; petroleum and oil stocks have had an upward trend in recent week despite the recent huge extraction from last week.

Petroleum production and imports (for the week of August 5th)

The four week average of US production (million of barrels a day) for the week of August 5th reached 5.505, which is lower by 0.2% compared with the previous week’s, but is 1.8% above the average production at the same time last year;

Below is a detailed recap of the information listed above (for the week of August 5th):

The average U.S. gasoline retail price changed direction and fell for the first time in six weeks by four cents per gallon compared with the previous week’s average; it reached $3.67 /g, which is $0.89 /g higher than the same period in 2010.

The national average Diesel prices declined for the second consecutive week by four cents compared with the previous week; it reached $3.90/g. which is $0.91/g higher than last year’s average price at same time.

A detailed analysis on crude oil price for the week of August 5 is herein.