Here is a weekly review of the U.S. oil and petroleum market including crude oil price and petroleum stocks for the week ending July 29th:

U.S. Petroleum and oil stocks changed directions and declined during last week by 1.94 million barrels, or by 0.11%; this is the largest extractions since April 15th, 2011. For the week ending on July 29th crude oil stocks reached 1,807 million barrels.

The chart below shows the petroleum and oil stocks levels compared to the WTI crude oil prices during 2010 and 2011. 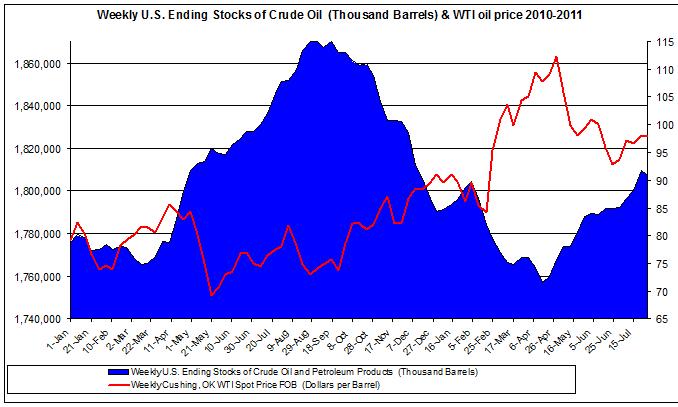 It shows the stability of WTI spot oil price during the past few weeks; petroleum and oil stocks keep on stocking up as part of a seasonality effect. The linear correlation of these two data series (their weekly percent changes) during 2011 is -0.141.

Petroleum production and imports (for the week of July 29th)

The four week average of US production (million of barrels a day) for the week of July 29th reached 5.517, which is unchanged from the previous week’s, but is 1.5% above the average production at the same time last year;

Below is a detailed recap of the information listed above (for the week of July 29th):

The average U.S. gasoline retail price inclined last week for the fifth consecutive week by a penny per gallon compared with the previous week’s average; it reached $3.71 /g, which is $0.98 /g higher than the same period in 2010.

The national average Diesel prices on the other hand declined for the first time in July by a penny compared with the previous week; it reached $3.94/g. which is $1.01/g higher than last year’s average price at same time.

A detailed analysis on crude oil price for the week of July 29 is herein.