The latest recovery of gold price is likely to benefit investors of gold ETFs such as SPDR Gold (NYSEMKT: GLD) and iShares Gold Trust (NYSEARCA: IAU). Leading gold ETFs have rallied in the past several weeks after they declined during most of 2013. Despite this recent rally, Analysts remain skeptical about the potential recovery of the yellow metal in 2014. What are the main factors that could affect the direction of gold price in 2014?

The weak gold market has reflected in the decline in ETF’s prices: SPDR Gold lost 7% of its value during November-December; iShares Gold Trust fell by 8.4%. Further, the demand for these ETFs also diminished as their gold holdings tumbled down by 11.6% and 8%, respectively, in the fourth-quarter of 2013. On a global scale, during the first three quarters of 2013, total ETFs’ demand for [l5] gold fell by 696 tons. In comparison, in the similar time frame in 2012, the ETFs’ demand rose by 191 tons. Despite the recent recovery of gold price during January, the demand for these ETFs continued to diminish: iShares Gold’s holdings fell by 0.6% during the month; SPDR Gold’s gold holdings decreased by 1%. Looking forward, the demand for gold as an investment could be determined by the following factors: 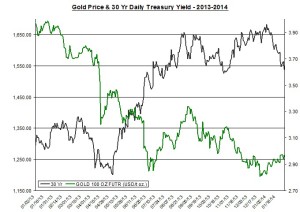 This could suggest a shift in market sentiment towards risk aversion – investors taking less risk and investing is assets that are considered less risky such as U.S long term treasuries and precious metals. If this sentiment continues, it could benefit the price of gold;