The recent European Central Bank decision to raise the Euro Area interest rate came with little surprise. What does this decision mean to the financial markets and in particular the commodities market?

The European Central Bank convened yesterday in Frankfurt, Germany, and there it was decided to raise the Euro Area interest rate by 0.25 percent point from its current level of 1% to 1.25%. The 1% interest rate was up to now Euro Area’s lowest rate ever and it was held at that position since June 2008.

One of the main reasons for this interest rate hike is related to the ongoing rising inflation rate: in March 2011 it reached 2.6% in annual terms, which is above the ECB’s 2011 annual target inflation of 2%.

Prior to the publication of the ECB’s decision, Jean-Claude Trichet talked about the interest rate, and he didn’t hint about the ECB’s bank decision, as presented by Yohay in Forex Crunch. .

The chart below shows the changes in interest rate and EURO inflation rate since January 2008. 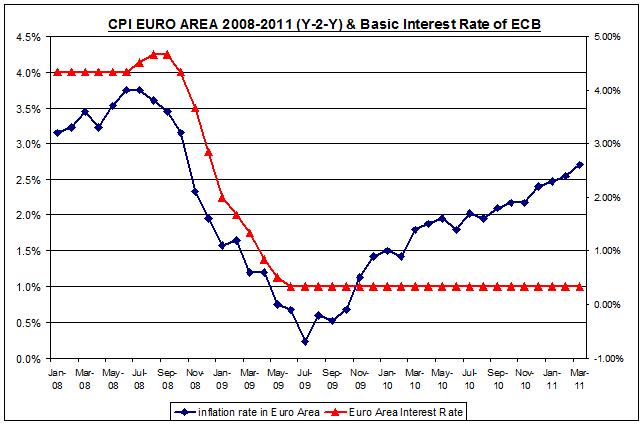 It shows that since mid-2009 there has been an upward trend in Euro Area inflation rate.

I personally think that the matter of inflation targeting is sometimes being used to often and a bit religiously by Central Banks. After all I don’t say that inflation is good but does this mean that reaching 2.5% annual inflation over 2% is that much of a disaster?

Also, one of the prime reasons for the rise in inflation is the food and energy commodities price hike. Does this 0.25% rate hike is likely to offset the household demand, which is the prime sector consuming, for food and energy?

For more the peril of inflation targeting you can read in this old post by Joe Stiglitz.

In any case, let’s examine how, if any, this interest rate might affect major commodities:

The current situation in Europe is that the crude oil market is tight and it became even tighter upon the commencement of the turmoil in Libya, among the major oil and natural gas exporter to Europe.

The tight oil market in Europe is also reflected in its prices as there is a premium for Brent oil over WTI.

Therefore, I think that it’s unlikely that this decision will manage to curb the rising crude oil prices, let alone in Europe.

In the past couple of days since the decision was published, major commodities’ prices rose, because of speculation around the weakening of the US dollar compared to Euro.

Gold and silver are also construed as investments, therefore in this matter, the interest rate hike might steer some investors towards government bonds, and consequentially curb the price hike of gold and silver (even though there is no evidence to support this claim so far). This scenario is good in theory in practice we might not see much of an affect as this interest rate hike seems to me too little.

What is next for ECB?

In macro economic theory, Central Banks should try to surprise the market (with the decision of raising the interest rate and the rate of increase) in order for the interest rate to have the affect it set out to do.

I think that if Euro Area CPI will continue to rise, as I remain skeptic that this recent decision will ease the rising inflations, then we might see an additional “surprise” interest rate hike at a higher rate than this recent hike, in the near future.