The recent economic slowdown in many leading economies including U.S, China and Euro Area has adversely affected many stocks. During the year (UTD) the S&P500 index rose by only 5.9%. This economic slowdown has also adversely affected the potential growth of Caterpillar Inc. (NYSE: CAT). Despite the good financial reports the company had presented and the growth of the company, it still managed to shed nearly 11% off its stock price during the year. What could explain this decline? I think the prices of oil have something to do with the decline in CAT’s stock price.

The economic growth of the U.S is plausibly among the key generators for the growth of Caterpillar Inc. One the basic and straight forward index that could be used to examine the economic growth of the U.S economy is the S&P500 index. During 2012 this index only rose by 5.9%. The linear correlation between the S&P500 index and Caterpillar stock price reached 0.71 during 2012. This means that nearly 51% of the company’s stock could be explained by the recent changes in S&P500. During June and July the linear correlation rose to 0.8.

The chart below shows the developments of S&P500 index and Caterpillar stock during 2012. It shows how the relation between the two is very strong and robust. 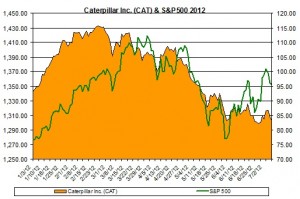 There were also reports of a rise in Shipments of manufactured durable goods during May and in particular there was also a rise in Heavy duty truck Motor vehicle bodies, parts, and trailers during that month. This report shows a rise in Caterpillar’s industry that should have positively affected the company’s stock price.

Does the ongoing decline in Caterpillar’s stock price is due to the company’s growth and financial reports?  On July 25th the company will publish its second quarter FR and it will reveal if there is something that should make inventors concerned. During the first quarter of 2012 the EBIT reached 2,411 million which is a 15% increase form the previous month and represents nearly 15% profitability. This means the company’s financials seems fine.

So now we come to oil prices. I think the recent drop in oil rates may have contributed to the decline in Caterpillar’s stock price.

During the year (2012) the linear correlation between Caterpillar’s stock price and oil prices was 0.48 (the daily percent changes); this means that under certain assumptions (including linearity of relation and normality of price changes) the changes in oil price could explain nearly 23% of the variance of Caterpillar’s stock. This is a high R square. Further, during June/July the correlation reached 0.67.

During 2012 the price of oil fell by 18.5%. United States Oil (NYSEMKT:USO) also declined by nearly 23%. Further according the company’s financial reports the rise in oil prices induces the demand for power systems (page 15):

“Worldwide demand for energy and higher oil prices are encouraging customers to invest, and we are seeing stronger demand for engines and turbines for petroleum applications”

Therefore the decline in oil prices might be among the key factors to reduce the future demand for power systems and thus may have adversely affected Caterpillar’s stock. Further, if oil price will continue to dwindle it may signal another decline in Caterpillar’s stock. Nevertheless, the company’s upcoming financial reports might provide a better indications if the decline in oil prices have had an adverse effect on the company’s financial results.