The price of oil continues to fall and within two months it declined by nearly $20. This downward trend continues. At the same time, the leading energy companies including Mobil Corporation (NYSE: XOM) and Chevron Corporation (NYSE: CVX) didn’t seem to be affected by this decline. Let’s examine the relation between oil prices and these companies’ stock prices. What could explain the recent rise in these energy companies’ prices?

During June, the price of WTI oil price fell by over 5.5%; United States Oil (AMEX:USO) price also declined by over 6.5%. Despite the plunge in oil prices in recent weeks major energy companies’ stocks including Exxon Mobil Corporation (NYSE: XOM) and Chevron Corporation (NYSE: CVX) didn’t seem to be adversely react to this downward trend. During June Exxon Mobil stock rose by 8.1% and Chevron by 5.4%. This isn’t an intuitive result because these energy stock prices are strongly related to the movement of oil prices: during 2012 the linear correlation between the daily percent changes of WTI oil (C1 future) and XOM stock reached 0.50; the linear correlation between WTI oil (C1 future) and Chevron was 0.587. This means the movement of oil price could explain at best 25% and 34% of XOM and Chevron respective stock changes.

The chart below presents the development of Exxon and oil price (C1) during the year (up to date). It shows how the recent drop in oil prices didn’t coincide with the rise of Exxon’s stock price. 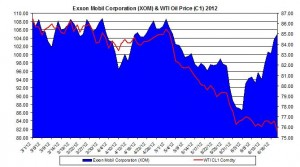 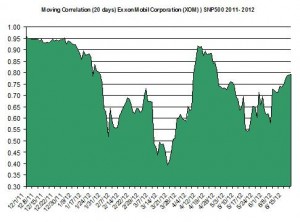 Another explanation of the rally in these energy stocks might be the recent rise in natural gas prices: during the month the price United States Natural Gas (AMEX:UNG) rose by 4.1%. But since natural gas price is very weakly correlated with these energy stock prices (the linear relation is only 0.11 with XOM and 0.16 with Chevron) these relations couldn’t fully explain such a sharp rise in XOM and Chevron only partly at best.

Let’s examine the recent news related to these companies that could also explain the rise in the companies stocks:

Exxon Mobil said last week it will start drilling oil in Siberia during 2013 along with state-run OAO Rosneft. This agreement is part of Exxon’s pledge spend nearly $3.2 billion in order to study and drill for some of the world’s largest resources in hard, unexplored provinces in Russia’s deep-water Black Sea and Arctic Kara Sea. This recent collaboration could translate into a company’s growth.

One of the company’s subsidiaries managed to close an agreement along with Kosmos Energy (NYSE: KOS) to explore offshore drilling in Suriname, South America. This exploration doesn’t immediately translate to profits but it is another potential growth for Chevron.