During October, the price (spot) of natural gas rose by 12.1%; by extension, the rate of United States Natural Gas (NYSEMKT: UNG) also increased by 2.6%. The future price (November delivery) hiked by 14.5%. The rise in prices during October was mostly related to changes in the weather – the rise in temperatures contributed to the increase in the demand for natural gas in the power sector (increase usage in Air conditioners). Further, there was an ongoing fall in natural gas production. These shifts suggest that the natural gas market has tightened. As I will present herein, I suspect will continue.

The chart below shows the recent recovery of the prices of natural gas in recent months. 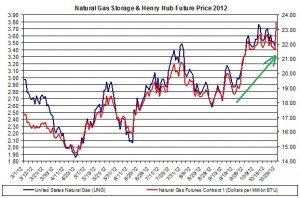 From the demand side, there are expectations by the EIA that this upcoming winter the temperatures will be closer to normal so that the natural gas consumption, unlike last year, will be close to regular demand.

This means the expected demand is likely to be higher than last year, which could also positively affect the price of natural gas.

The chart below shows the developments of the spot price of natural gas against the natural gas storage. 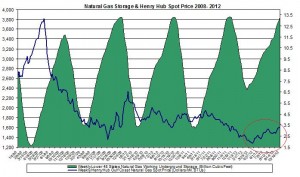 From the supply side, there are still concerns that the recent Hurricane Sandy could have an adverse effect on the pipelines of natural gas. Once it will become clearer the magnitude of the destruction, if at all, of this Hurricane, natural gas traders could better price in, the effect of the Hurricane to natural gas.

Even if the Hurricane won’t damage any major pipelines or other natural gas related facilities, the supply side is likely to pull up the price of natural gas. There is an ongoing drop in the natural gas production: the natural gas rig count reached, as of October 26th, only 416 – which is less than half the number of rigs only a year back. On the other hand, oil rigs reached 1,382 which are nearly 40% higher than a year ago. This means there is a shift from gas rigs to oil rigs. If the NG production will continue to dwindle, it could suggest the price of natural gas will rise.

Chevron, much like Chesapeake, is also likely to benefit from the recovery of natural gas prices. Nonetheless, the recent drop in the prices of oil and the decline in the S&P500 index have adversely affected Chevron’s stock. During the month, Chevron’s stock declined by nearly 4.6%.  The company will publish its third quarter financial reports on November 2nd. 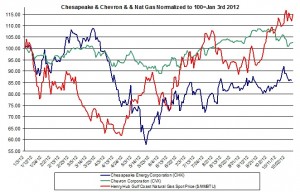