There has been a lot of hype of the recent recovery of natural gas prices and by extension the rise in United States Natural Gas (UNG). Will this rally help boost the stock of Exxon Mobil Corporation (XOM)? I think even if the prices of natural gas will continue to increase it will have little to no effect on XOM.

I have come across several articles, in which the authors claimed the recent rise in natural gas prices will help rally XOM. But is this true?

During the past several weeks the price of natural gas rose very steadily and promptly: from April 19th up to date the Henry Hub short term future rose by 41.9% and the price of United States Natural Gas (UNG) also increased by 34.7%. The natural gas storage levels are still high, but the injections are lower than last year; furthermore there are many who think the recent rise in natural gas will continue. I still hold the position that this rally will be short lived, but let’s assume natural gas prices will continue to rise. Will this help XOM stock price.

First, the current natural gas prices are very low for the season: the current NG spot price is nearly $1.85 below the price from the same time last year.   On the other hand the price of XOM is roughly the same rate (in the low 80s mark) now as it was during the parallel week last year. OK, but this doesn’t consider many events that occurred (e.g. the war in Libya) that could have affected Exxon’s stock. So let’s examine the correlation between Exxon and Natural gas:

The chart below presents the development of the stock vs. the changes in short term natural gas price during 2012. 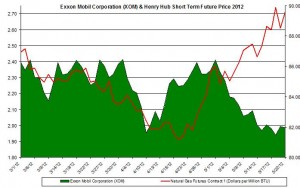 As indicated from the chart, both rates seem to have a low correlation. The recent rise in natural gas doesn’t seem to slowdown the fall in XOM. In fact (during 2012) the linear correlation between the daily percent changes of Henry Hub (short term future) and XOM stock price is only 0.08, which means that at best the price of natural gas can explain only less than 1% of the volatility of the stock. This means (under certain assumptions) that nearly 99% of the volatility of the Exxon stock is coming from other factors (e.g. oil prices).

Lastly, even though Exxon is the leading company in producing not only oil but also natural gas, the share of natural gas out of the total operational revenue of the company isn’t much and is estimated at roughly 4% to 5% (in 2011).

This means that other factors including oil prices, which are currently falling, eclipse the effect of natural gas prices on the XOM stock.

Therefore even if natural gas will continue to trade up its effect on XOM is likely to be marginal at best.