Coffee prices had declined during most of the year except for the rally they have had in recent weeks. This rally however coincided with the rise in many other commodities prices such as oil prices. Despite the fall in coffee prices they didn’t seem to positively affect the stock price of Starbucks Corporation (NasdaqGS: SBUX). It is well known that Starbucks buys its coffee supply a year in advance, but the stock price isn’t solely comprised from the changes in the financial results of the company in the current year, it is also affected by future prices that determine the value of the company (assuming you use a DCF valuation process). Therefore shouldn’t the fluctuations in the coffee prices affect Starbucks stock price? Let’s see what is going on that could explain this discrepancy.

Many traders who follow the stock price of Starbucks know that the company buys in advance its coffee beans for the year. E.g. according to the 2011 financial reports, as of October 2011 Starbucks had a total of $1.0 billion in purchase commitments, of which $193 million represented the estimated cost of price-to-be-fixed contracts. The report goes on and claims that this commitment should be an adequate supply of green coffee through fiscal 2012. This also means that if the coffee price were to go down during 2012, the company wouldn’t benefit from it nor would it show this savings in the financial reports for 2012.

Further, as seem in the chart below the stock price of Starbucks doesn’t coincide with the fluctuations of coffee prices. 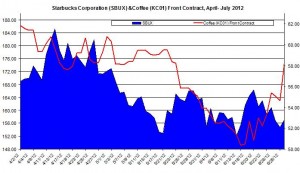 The linear correlation between the daily percent changes of Coffee (KC01) and Starbucks stock price is very low at 0.09, which isn’t significant.

But as I have pointed out this isn’t the case for Starbucks’ stock price and the fluctuations in the price of coffee doesn’t seem to coincide with the changes of Starbucks’ stock.

There are several considerations that could explain this behavior:

For further reading: Coffee Outlook and Analysis for June

This is by no means an investment advice only general market analysis.