The sharp rise in shares of Chesapeake Energy (NYSE: CHK) has curbed down in the past several months. Albeit the company’s third quarter earnings results were good, this wasn’t enough to impress investors. Has the company done well in the third quarter compared to its competitors such as Exxon Mobil (NYSE: XOM) and Chevron (NYSE: CVX)? Will the company continue to grow in the fourth quarter? Let’s analyze these issues.

One of the main driving forces behind the company’s sharp rise in revenues is the 119% spike in marketing and gathering operations. Alas, this business segment has only a profit margin of 0.7% so it doesn’t have much of positive effect on Chesapeake’s bottom line. Conversely, the oil and natural gas operation has a gross profit margin of 82%; so the 15.5% rise in revenues in this segment is something worth noticing. The company’s gain in this segment’s revenues was mostly related to higher oil and natural gas prices.

Although the price of oil rose by 15% during the quarter, the company’s realized price of oil increased by only 1.4%. This was also the case for Exxon and Chevron. Exxon’s realized  oil price grew by 5.6%; Chevron’s , by 7%. Moreover, these companies’ revenues remained near-stagnate in the third quarter: Chevron’s revenues inched up by 0.2%; Exxon’s revenues slipped by 2.4%. Chevron’s modest rise in revenues was due to adverse impact from currency changes, decline in asset sales, and little progress in downstream revenues. For Exxon, the sharp drop in downstream sales was among the main reasons for the decline in sales. Thus, in terms of growth in sales, Chesapeake has outperformed its competitors.

Moreover, the rise in prices of oil and natural gas has also reflected in the increase in Chesapeake’s profitability.

The chart below shows the changes in Chesapeake’s operating profit (excluding goodwill charges) and normalized prices of oil and natural gas. The company’s profitability slightly grew to 9% in the third quarter of 2013. 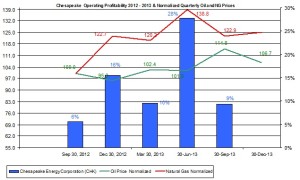 During the past year, the company has slowly been gaining back the confidence of the markets: Chesapeake’s credit default swap (five years, in US dollar) has declined during 2013 from 589 basis points at the beginning of the year to nearly 270 bp at the end of October . The current price of 270 means the annual premium is $270 thousand in case the company defaults $10 million of its debt within the next five years. The sharp drop in the CDS is an indication that Chesapeake is regaining the confidence of both bondholders and shareholders. The company seems to have sold enough of its assets to finance its capital expenditure for the near future, repaying some of its loans and paying dividend. The last sale was made back in July when Chesapeake  sold Northern Eagle Ford Shale and Haynesville Shale for nearly $1 billion. In terms of dividend, the company will pay a quarterly dividend  of $0.0875 per share, which comes to an annual yield of 1.4%. In comparison, Chevron offers an annual yield of 3.3%; Exxon pays a yearly yield of 2.6%. If the company is slowly regaining the confidence of its investors, is the stock price still right?

Despite Chesapeake’s improvement its valuation remains lower than its competitors.  In the table below are the calculated enterprise value and EV-to-EBITDA ratios of Chesapeake, Chevron and Exxon.

As you can see, Chesapeake’s EV-to-EBITDA ratio is still higher than the industry average but remains lower than the ratio of Exxon or Chevron. These findings suggest, at face value, that Chesapeake’s stock price remains well priced and still has room to grow.

I think Chesapeake has done well in the past year to get out of the cash flow problems it faced a year back. The company still has room to improve its financial situation and increase its operations mainly in the oil market. Finally, the company’s fourth quarter earnings results might fall short from the third quarter but are   likely to outperform the parallel quarter in 2012.