During the past couple of months, the price of oil has slightly increased. Despite the recent rally in oil prices, they are still down for the year by nearly 8%. The ongoing rise in the oil production and stockpiles along with the expectations for a slowdown in growth in demand for oil should have pulled down the price of oil. Will oil further rally in the months to come? Let’s analyze the recent developments in the oil market, and try and figure what’s up ahead for oil.

During December (up to date), the price of oil increased by 2.1%; United States Oil , by 1.5%. Despite the recent modest gain in the price of oil, it has underperformed other assets during the year including the S&P500 and natural gas prices. In the chart below are the normalized (as of January, 3rd 2012) prices of natural gas, oil and S&P500 index. 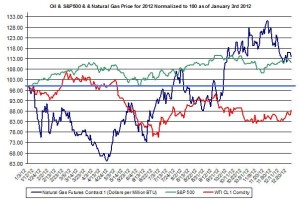 The recent rise in the price of oil might have positively affected the revenues of major oil companies and also contributed to their operating profitability in the fourth quarter. Following the recent rise in the prices of oil in recent months, some leading oil companies’ stocks have also increased. During December, shares of Chevron Corporation (NYSE: CVX) rose by 0.7%; shares of Royal Dutch Shell (NYSE:RDS-A), by 2.3%. Moreover, the linear correlation between the stock price of Chevron and the price of oil was 0.44 during the past couple of months; the relation between Shell’s stocks in oil price was 0.28. These relations suggest, at face value (assuming linearity and normality of data), that the movement of oil price could explain nearly 20% of Chevron’s stock volatility and 8% of Shell’s volatility. These relations should be taken with a grain of salt but imply that if oil prices will continue to rise, they could contribute to the rise in oil companies’ stock prices.  This brings the question; will oil prices change continue to rise? Let’s check the fundamentals to answer this question.

From the supply standpoint, according the recent EIA report, the U.S oil production rose, as the average production increased during December by 2.3% and as of December 21st was by 17.4% higher compared to the same week last year. Refinery inputs also increased during the month by 4% and were also 4.4% higher than last year. Finally, Imports also increased by 4.4% during December. The rise in imports could have curbed the rise in oil prices during the month.

The chart below shows the developments in oil refinery inputs and the changes in oil prices on a weekly basis during the year. The linear correlation between these two data sets is -0.23. This relation suggests, at face value, that if the refinery inputs will continue to rise, it could adversely affect oil prices.

From the demand side, the U.S economy is showing some signs of recovery: according to the latest GDP update, U.S GDP expanded by 3.1% (annual growth) in the third quarter. If the upcoming U.S reports will show signs of progress, they could suggest growth in the U.S demand for oil, which, in turn could lead to a rise in the price of oil. In the days to come (up to the end of the year) the debates over the budget cuts (the fiscal cliff) in Congress are likely to affect the price of oil via the movement in the US dollar.

China, among the leading countries in importing oil, has shown some signs of growth as its manufacturing production expanded during December. On the other hand, the EU is still showing little to no growth o, which could result in a drop in demand for oil in this region. Therefore, the direction of the demand for oil remains unclear for now but some analysts still project the global demand for oil won’t rise in 2013.

The bottom line: I think despite the modest gain in the price of oil, and the uncertainty around the potential growth in the demand for oil, the recent developments in the storage and supply suggest the price of oil will come down in the weeks to follow and perhaps even reach the low 80s.