In the past several days the price of natural gas tumbled down. Despite its recent fall, natural gas price is still higher than last year. Will natural gas continue to fall? How will the recent developments in the natural gas market affect leading oil and gas producers such as Exxon Mobil (NYSE: XOM). Let’s also take a look at the Liquefied Natural Gas market.

Natural gas storage remains low compared to last year and compared to the five year average. During May storage buildup was 276 Bcf. In comparison, during the same time frame in 2012, the buildup was 168 Bcf. If the buildup pace will continue to pick up, this could suggest the natural gas market is loosening up.

The chart below shows the weekly natural gas price and storage in recent years. 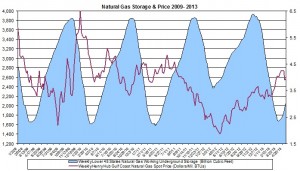 The demand for natural gas in the residential/commercial sector tumbled down in recent weeks as the weather is heating up. On the other hand, consumption in power sector rose as leading utilities companies continue to use their natural gas stockpiles for electricity. But as their stockpiles will dwindle in the coming weeks, they are likely to shift back to coal. Considering the high price of natural gas, compared to last year, it’s more likely that utility companies will turn back to coal. In such a case, the demand for natural gas in the power sector is also expected to fall. On the other hand, natural gas production continues to slowly rise.

If these trends will persist in the coming weeks, they could lead to a further drop in prices.

Despite Exxon’s decline in natural gas production, it is planning to augment its natural gas operations: Back in April, the company entered into a partnership with BHP Billiton to build the world largest floating liquefied natural gas (LNG) processing and exports plant in Australia. The LNG business is expected to continue expanding in the coming years; Exxon is likely to benefit from this growing industry. Speaking of LNG let’s examine the recent developments in LNG in the U.S.

The liquefied natural gas market continues to slowly rise. Moreover, the global demand for LNG has increased in recent years and is expected to further rise in the coming years. Japan’s LNG sharply increased in the past couple of years following the earthquake from March 2011.  According to the U.S Energy Information Administration, the U.S will become a net exporter of LNG by 2016. In the meantime, Cheniere Energy (NYSEMKT:LNG), the only company allowed to export LNG from the U.S. have benefited from the rise in natural gas production: Its stock spiked by more than 60% (year-to-date). Nonetheless, the company’s revenues fell again by 6.5% in the first quarter of 2013. The expectations from the company to sharply increase its revenues in the coming years are likely to keep this company’s stock rising. Cheniere Energy continues to spend a big chunk of its cash on capital expenditure (in the first quarter of 2013 capital expenditure reached $464 million). The company finances its capital expenditures with debt: In the past year Cheniere Energy’s debt grew by more than 37%.  It allocates its funds on projects such as Sabine Pass Liquefaction. This means, it will take a long while until this company will return its investment.

I think natural gas will continue its downward trend in the coming months, which will slightly pull down revenues of leading gas and oil companies (but not by much). The LNG market is likely to keep heating up and companies such as Cheniere Energy will eventually produce growth in revenues.