The price of oil hiked in the past couple of months. During August the price of WTI oil rose by 9.6%; United States Oil, by 9.8%. The recent rally of the Euro/USD may have contributed to the rise in oil prices. There weren’t any significant changes in the fundamentals, but there are several news items that could eventually keep oil prices rising in the near future. Let’s examine the recent developments in the oil market and markets that are tangential to oil that could suggest what is up ahead for the oil.

The Fed reignited the expectations of many commodities traders that another quantitative easing could be around the corner. Many commodities prices tend to have a positive relation with the U.S money base. If the FOMC will announce in the near future – the next FOMC meeting will be held between September 12th and 13th –of another QE that will hike the U.S money base then oil prices could further rise due to this decision. I suspect that the Fed won’t announce of QE3 in the upcoming FOMC meeting and will wait until after the U.S election in November.

As seen in the chart below, during recent years there was a mid-strong relation between the monthly average price and the development of U.S money base. By the way, the hike in the price of oil during the beginning of 2011 wasn’t so much due to the growth in the U.S money base and more related to the developments in the Middle East at the time – specially the war in Libya that reduced the global oil supply. 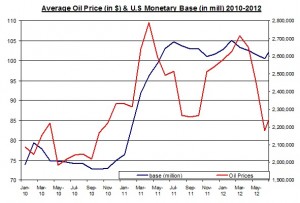 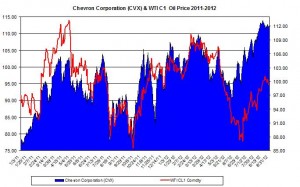 During last month, the linear correlation between Chevron and oil (daily percent changes) was 0.67, and between Exxon and oil it was 0.59. These are mid-strong correlations. The rise of oil prices may have contributed to the rally of these energy prices. These energy companies are also strongly linked with the S&P500 index (during August the linear correlations were 0.79 and 0.80, respectively). Thus, the rise of the S&P500 may have also contributed to the recovery of these energy companies’ rise.

During recent weeks many financial reports were published; they referred to the economic situation conditions of the U.S: U.S’s manufacturing PMI index edged down to 49.6; U.S GDP expanded by 1.7% during the second quarter of 2012; U.S non-farm payroll expanded by 96k in August; The reports from U.S point out that the economic conditions don’t improve by much. This might pull down the prices of oil from the demand side.

From the Supply side the U.S oil production declined by 0.24% (week over week) but was 11.8% above the production level in 2011. Refinery inputs also declined. On the other hand, Imports rose by 3.2% (W-o-W). This mean the U.S supply didn’t expand by much. The recent shut down of oil refineries during the end of August at the Gulf of Mexico due to Hurricane Isaac may have curbed the rate of oil production, but only for a short period, because there weren’t any news of any damages. We are still in Hurricane Season and if there won’t be any additional significant Hurricanes or tropical storms in the near future, then this should keep production high and curb the rally of oil prices from the supply side.

The bottom line is that oil storage is slightly above last year’s but not by much.

During August, the EURO/USD rose by 2.2%. There are still positive correlations between the Euro/USD and oil prices:  during August, the linear correlation between EURO/USD and oil price reached 0.72. Therefore, if the USD will continue to depreciate against the Euro this may positively affect oil prices. There are expectations that ECB will commence its bond purchase program in the near future that will help rally the Euro as it will reduce the instability in the EU vis-à-vis the debt crisis in Spain and Italy. In such a case, this could also positively affect oil prices, via the recovery of the Euro.

There are certain reasons to suspect that oil prices will continue to rise including the recent changes in the forex markets, the expectations of another QE program and the uncertainty around the adverse effects the Hurricane Season could have on the oil production. On the other hand, the changes in the supply and demand suggest that oil prices might stay high in the near future but won’t be pressured up in the upcoming weeks. So I guess the prices of oil might further rise but not at the same high rates as in August.