Oil Prices bounced back from last month’s tumble. During July, the price of WTI oil rose by 7.6%; United States Oil (NYSEMKT:USO), by 7.4%. The recent decline in the Euro/USD may have curbed the rise in oil prices. The fundamentals didn’t change much so there shouldn’t have been such a sharp movement in oil prices; nonetheless, during recent months the volatility of both WIT and Brent oil hiked. Will the recent rally in oil price hold up? Will oil prices reach the $100 mark in the near future? 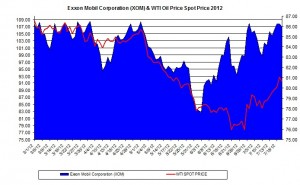 During July the linear correlation between Chevron and oil (daily percent changes) was 0.63, and between Exxon and oil it was 0.56. These are mid-strong correlations. The rally in oil prices may have contributed to the recovery of these energy prices. Since these energy companies are strongly correlated with the S&P500 index (during June-July the linear correlations were 0.75 and 0.76, respectively). Alliteratively, the stagnations of the S&P500 may have curbed these energy companies’ rise.

In the chart below is development in standard deviations of WTI and Brent oil (daily percent changes) during recent months.  It shows the rise in oil prices’ volatility during June and July compared with previous months’. 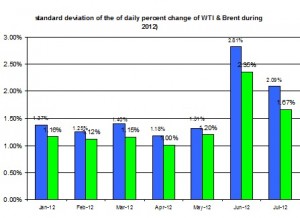 From the Supply side the U.S oil production declined by 0.43% (week over week) but was 11.5% above the production level in 2011. Imports and refinery inputs also declined. This mean the U.S supply doesn’t progress.

OECD inventories rose by 15.4 million barrels during May; they reached 2,672 million bbl. The oil stockpiles are still below the 5-year average.

The bottom line is that oil storage is slightly below last year’s but not by much.

During last week the EURO/USD declined by 0.74% and during the month by 4%.  There are positive correlations between the Euro/USD and oil prices:  during June-July, the linear correlation between EURO/USD and oil price reached 0.84. Therefore, if the USD will continue to appreciate against the Euro this may adversely affect oil prices.

There are several factors that could lead oil prices rising to the high 90s especially if the oil market will tighten due to supply constraints. But I speculate this won’t be the case. Don’t get me wrong, if the tensions between Iran and Israel and between Iran and the U.S will take a turn for the worst it could pressure up oil prices to the $100 mark very promptly.  But unless something will actually occur, my guess is that the decline in demand and the strong USD will prevail so that the oil market will loosen and oil prices will come down to the low 80s.

This analysis on oil prices was first published on Trading NRG