The oil market cooled down very rapidly in the last few days: the price of WTI oil and by extension United States Oil (USO) has tumbled down during May by nearly 18% – the sharpest monthly fall in over a year. What happened in the oil market that could account for such a sharp turn in the price of USO? There was some fundamental news that indicated oil prices could come down during May: The robust oil production of OPEC in recent months despite the tension between Iran and the U.S, the rise in OECD inventories. But it seems that the sharp appreciation of the US dollar and the concerns for the future oil demand are the main factors to explain this decline. Let’s examine the fundamental changes from last week and deconstruct this movement in oil prices.

During last week the price of WTI spot oil tumbled down by 8.2%; United States Oil (USO) price also fell by 8.18% and settled by Friday on $31.43; Brent oil declined by 8.47%; United States Brent Oil (BNO) tumbled down by 7.7% to reach $69.66.  The recent sharp turn in oil prices are obviously not helping energy companies such as Chevron Corporation (CVX), the leading energy company, as its stock price declined by 2.4% during last week.

The chart below shows the price of WTI and Brent oil term during 2011 and 2012. It shows the recent drop in oil prices are among the steepest during these years. 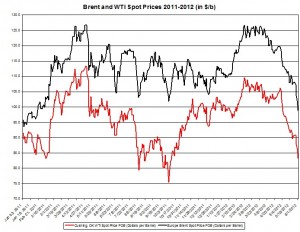 The EURO/USD continued to decline last week by 0.66%. Furthermore, the AUD/USD also fell by 0.59%. There are still positive correlations among these exchange rates (EURO/USD, AUD/USD) and oil prices. This means as long as the USD will continue to appreciate against the EURO (especially as the European debt crisis continues to feed the anxiety in the markets and pressure down the Euro) this may further drag down oil prices.

This is likely to be among the key factors to consider for the recent decline in oil prices: the concerns for an economic slow down not only in Europe and U.S but also Japan and China – among the leading countries in importing oil are likely to keep the prices of oil down in the near future; unless the economic projections for these economies will change. The U.S stock market, which serves as another indicator for the future demand for oil in U.S, has also declined during last week: The S&P 500 (^GSPC) declined by nearly 3%. If the market won’t bounce back in the near future, oil prices are likely to remain low.

From the Supply side during last week the U.S oil production edged up by 0.4% compared to the previous week and was 10.4% above the production level in 2011. Imports also edged up during last week by 0.7%; on the other hand they were 2.2% below the levels in 2011.  The refinery inputs also rose on both counts (compared to last week and last year). This means the supply is still robust and may keep the U.S oil market loose. 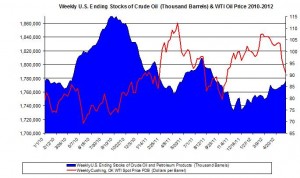 I suspect the decline in oil prices might continue as long as there are still concerns regarding a potential economic slowdown in the leading economies and no real and clear threat in the oil production. This means in the weeks to follow we might continue seeing a further decline in not only USO and BNO, but also other leading energy companies (assuming all things equal) such as Chevron Corporation (CVX) that will be adversely affected from the current fall in oil prices.